Library is checking out from the city 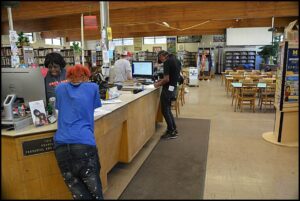 The Hamtramck Public Library is splitting off from financial services provided by the city, and it will now take full control of its operation. File photo

By Charles Sercombe
It’s not quite a divorce.
Call it more of a separation.
The Hamtramck Public Library Board of Directors has decided to break away from being involved with the city.
What this means is that, starting on July 1, the library board will take over its own finances, personnel issues and, even, maintaining its own building.
So why is this more of a separation than a complete divorce?
The city will still own the library building.
The split was made public at a recent city council budget hearing, when City Manager Kathy Angerer mentioned it.
Angerer said the library, located at 2360 Caniff Ave., can legally go its own way.
This isn’t the first quasi-government entity to break away from the city. The Hamtramck Housing Commission took a similar step several years ago.
According to recent library board minutes, the city had been increasingly dipping into library funds to offset costs for its various administrative actions relating to the library.
The library had previously been paying the city about $12,000 a year for that service, but that figure starting climbing upward to an additional $67,000-plus from between June 2021 and March 2022.
Angerer said the increase reflected the true costs the city was spending for the library. For the city, this presumably means that with the library handling its own costs, there will be less of a work burden on the city administration.
The library generates its own revenue through a voter-approved property tax (an additional 1.8 mills) that produces about $350,000 a year.
The library also receives grant money and donations. Their projected operating cost for next fiscal year (which starts on July 1) is $427,000.
Asked why the library board took this step, Board President Ray Bittner said it came down to this:
“The question is, can we afford not to be separate?”
The separation becomes official at the end of the city’s fiscal year, which is June 30 of every year.
The library employs two full-time employees (which includes a director) and five part-time positions. Prior to the Covid pandemic, about 70,000 visitors visited the library each year.
During Covid, because of limited in-person services, that number dropped to 25,000 visitors per year, but should trend back up now that pandemic restrictions have been eased.
The library also has online services available.
Posted April 29, 2022

2 Responses to Library is checking out from the city