Local bakeries are ready for the paczki rush 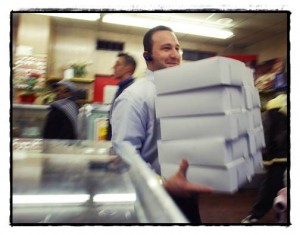 Vicky Ognanovich, down the street at New Palace Bakery, claims it was when Dodge Main closed, and reporters swarmed in to cover that event — including the late J. P. McCarthy and his entourage, who stopped by to check out the famed fried pastries.

Whether due to one force, the other, or a likely combination of both (and then some), the city again looks forward to a day when potentially all the world’s a Hamtramckan: Fat Tuesday, the Day of the Paczek; a day, it’s hoped, that will inject cash into the city’s economy like, well, jelly into a doughnut.

Although Hamtramck will perhaps long be thought of as Detroit’s prime Polish enclave, none of the bakeries are Polish-run anymore. Bakic and Ognanovich are Serbian, and Rose Gjorjeski, proprietor of New Deluxe Bakery on Conant, is Macedonian. They’ve each been making the wondrous doughy treats for decades, however.

Gjorjeski, asked what she recalls of Paczki Days past, instead laments the loss of the long-time customers. Whether they stopped coming in due to their having passed away, moved on up, or whatnot, she doesn’t always know, but they are certainly missed.

Her store, surrounded as it is now mostly by Bangladeshi businesses, and being a bit off the beaten path that is downtown, may be feeling the prolonged economic pinch more than the others. Still, aided substantially by daughter Michelle, she soldiers on, prepping for what is sure to be the biggest day of the year.

Talking of soldiering on, New Martha Washington’s counters are stacked almost to the ceiling with boxes, giving off the appearance of a bunker about to see a skirmish blow through.

Bakic says her building dates to about 1925, when the ovens were fired by coal. All has of course been modernized now, and she, along with mother Ivanka and sister Sally, work the counters with a relaxed feel. Her parents co-acquired the business around 1973, by her estimation.

In addition to the bakery, they operate Campau Towers burger restaurant in the adjacent building.

At New Palace, Ognanovich, assisted by her daughter, daughter-in-law, son, and even granddaughters now, has seen her family own the 100-year-old building for the past 40-plus years, and she herself has worked here for nearly that long. The extra floor space will come in handy when the lines start to swell. She proudly points out the press clippings framed and hung behind the counter, peering over her glasses at the numerous prior articles written about the business over the years. Most of them are now considerably yellowed with age.

The bakeries will be open for greatly extended hours, starting on Sunday the 6th, with New Martha Washington staying open overnight from Monday into Tuesday, New Palace open at 3 a.m on Tuesday, and New Deluxe open by 5 a.m.

Get in line early, and hope the weatherman cooperates. And hope too that the windfall Paczki Day brings, this year, might signal the start of a new spring for the city itself.