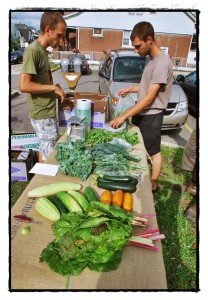 It may be small now, but there is plenty of room for growth for Hamtramck’s first-ever Farmer’s Market.

It’s the brainchild of Alex and Zina Lumelsky, who wanted to bring into town locally-grown fresh, and preferably organic, produce.

So far, three growers have agreed to set up tables every Wednesday, starting at 5 p.m., in the city parking lot between Polonia and Polish Village Café, which is a handy spot to capture those going to get a bite to eat. 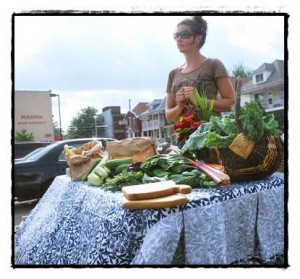 The idea was kicked off just three weeks ago.

“It’s going to be small, but it’s a seed,” said Alex Lumelsky.

There’s been one unexpected bump in the plan, however.

“This growing season has been pretty weird,” Alex said. “We had no spring.”

As a result, he said, not a lot has been able to grow this season. Nevertheless, what we saw was pretty amazing: fresh green beans, kale, cukes, carrots, collard greens and squash.

Last Wednesday a steady stream of customers heading to the restaurants stopped by.

Two guys bought a bag of green beans, and then drove back a few minutes later for more. They must have really liked what they got. Or maybe it was just too good a deal to pass up. 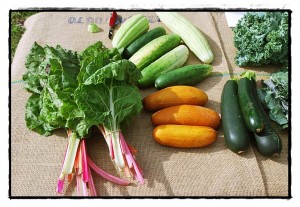