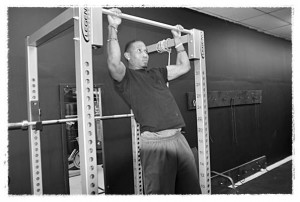 At New Breed Fitness, you might find yourself working out with some pro players.

To listen to Community & Economic Development Director Jason Friedmann talk, you’d never think there’s a lingering economic slump.
Hamtramck is bustling with new development, he says, and darned if you don’t get pumped up hearing about it.

But first some disappointing news. The long-anticipated Ooties restaurant won’t be opening up after all at a former Thai restaurant on Jos. Campau and Evaline.

Ah, but there’s good news for that spot, says Friedmann. There is now some competition among some interested hipster-type restaurant owner wannabes.

The space has been renovated and is ready to go into operation.

Just down the street on Campau, a major renovation is about to launch. And with it will come an influx of skateboarders. A skateboard company called CHIIPS is relocating from the city of Plymouth to the former Hamtramck Hardware on Campau.

And there’s more to that story.

The Hamtramck area is about to become a major destination spot for skateboarders. A sculptural skate park is going to be created in the neighborhood just north of Hamtramck, across from Carpenter and close to Conant.

That’s an area where artists have already begun to renovate homes, thanks to local power couple Gina and Mitch Cope.

Across from the soon-to-be skateboard shop is a new gym called New Breed Training Group. This is a serious fitness center, but it also boasts of being super customer-friendly.

The gym had been located in the famed Russell Industrial building just south of Hamtramck.

We’re not sure what connections they have at New Breed, but some big-time college football players – and even some pros –major college – are known to work out here.

We’ll have more on this later.

Travel further north on Campau, and the news is someone bought the former Citizen newspaper building, with a plan is to turn it into a cultural center.

And closer to Carpenter on Campau, a former dive diner and horse track betting center has experienced a major makeover and will become a doctor’s office.

And speaking of doctor’s offices, some more will be moving into a former creamery building on Holbrook that was damaged in a fire a few years ago.

Hamtramck, it appears, is beginning to rebound.