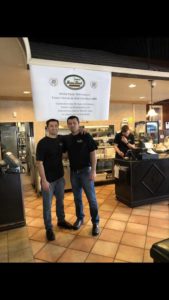 Brothers Mario and Nick started up Maine Street Restaurant 20 years ago. The restaurant has remained a favorite for many local diners. Stop by and wish them a happy anniversary.

By Charles Sercombe
While many restaurants have come and gone in Hamtramck in recent times, there has been one constant for the past 20 years.
Maine Street Restaurant, owned by brothers Nick and Mario Lulgjuraj, has withstood all sorts of food trends that have been plated up in Hamtramck over the years.
Maine Street’s appeal is that it specializes in comfort foods, featuring classic American dishes as well as Greek favorites.
What’s their secret to success?
“Hard work,” was the first thing that came to mind for Mario.
He should know.
He and his brother have worked in restaurants – mostly in Detroit’s famous Greektown – since they were in their teens.
Imagine going to high school all day and then working a shift at night.
And they still work long hours – up to 15 hours a day.
When they aren’t manning the grill or tending to the other jobs in the restaurant, they spend their extra time in the real estate arena. They have developed a number of commercial properties in the city – most notably turning an empty lot at Caniff and Gallagher into a thriving commercial hub.
After graduating from Hamtramck High School, the brothers pooled their money and took over the former Applebee’s where Maine Street is now.
They not only took it over, they also plowed money into the building by redesigning both the inside and outside.
The pair has also given back to the community. They help with fundraisers for the public schools, and even award a $2,500 scholarship each year to one of their employees who is still in school.
Pressed further on tips to share with would-be entrepreneurs, Mario said:
“You’ve got to be disciplined, never give up, and follow your dreams,” he said. “A lot of people dream, but you have to follow your dream.”
Of course, being in the restaurant business means interacting with the public – and we all know how fickle people can be.
Mario rolls with the punches.
“I enjoy serving people,” he said. “People come here, and they come to feel like family.”
Here’s to another 20 years of dishing up good food and good vibes.
(Maine Street is located at 11650 Jos. Campau. For those participating in this Saturday’s 5K Paczki Run, you can enjoy a 15-percent discount.)