Major makeover in the works for Pope Park 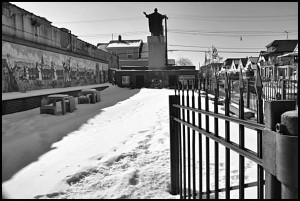 Pope Park will soon get a new look, which includes removing the iron gating.

Pope Park will soon get its first significant makeover since it was installed in 1982.

The park’s centerpiece is a statue of Pope John Paul II, the only person of Polish descent to be named pope.

The Karol Josef Wojtyla Committee presented its plans for renovation of the park to the city council a few weeks ago, and received their support.

The committee, named after the late Pope’s birth name, will remove the iron gating around the park and bring in landscaping.

Committee member Tom Jankowski, who is also the former mayor of Hamtramck as well as a recent city councilmember, said it will cost about $50,000 to make immediate repairs and improvements.

The committee is on its way to becoming a 501 (c) non-profit that can accept donations directly. Until that time, donations can be made through the Piast Institute.

Previous work was done to shore up the foundation of the statue, which was designed by the late Bruno Nowicki.

The iron gates came from the old Dodge Main plant, which at one time was Hamtramck’s top employer and taxpayer. The gates will be donated to the Hamtramck Historical Museum.

Work on the park this year coincides with Pope John Paul II being canonized as a saint on April 27.

The erection of the statue caused a minor controversy because the pope was still alive. It’s customary for statues to be installed after the death of the subject in question.

But the love and pride of Polish-Americans trumped anyone’s sense of proper decorum, and thousands of visitors have since made trips here to view it.

Even the Pope gave a thumbs up when he visited Hamtramck in 1987. He passed the statue during his motorcade down Jos. Campau to what was then an empty field at Campau and Hewitt St. where he addressed thousands of people waiting to see him.

It was one of three speeches he gave during his visit to Detroit that year. In Hamtramck, he stressed the importance for immigrants to keep in touch with their ethnic and family roots.

One Response to Major makeover in the works for Pope Park