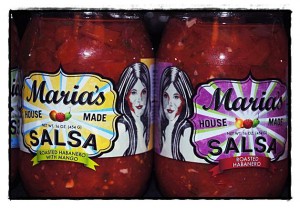 The journey from restaurant to refrigerator was an unforeseen development for the spicy sauce, which made its humble debut as a complimentary side dish. Though it was never intended to become a stand-alone business, shortly after the restaurant launched customers literally ate up the chance to get more salsa, and the idea to jar and market the product was born.

It took another two years of development before the salsa was ready to be sold in stores. After working with food scientists – first at Cornell and then at Michigan State University – the product was fully analyzed for nutritional value and declared safe for distribution.

“Our salsas have all been tested for quality control and have a shelf-life of 30 days,” says Marie Pronko, co-owner Maria’s Comida. “But we worked hard to keep the taste the same as it is in the restaurant.”

Before the salsa can be sold in stores, it must first be jarred and labeled. That process occurs weekday mornings before the restaurant opens and on Sundays when it is closed, and, like everything else, it’s a family affair. Head Chef Al Pronko makes the salsa while his son Frederick and daughter Marie bottle and label the product.

At just $5.99 for a 16-ounce jar the salsa is a steal, and with about a half-dozen locations throughout the metro area it can be picked up even on a whim. However, that’s not too likely, as since the salsa hit the market it has rapidly gained a following at each of its distribution points, with many customers eagerly awaiting the arrival of the next shipment each week.

In the future the Pronko family would like to see their salsa business expand – it has already helped bring in new customers to the restaurant – but for now they are taking things as they come. With last year’s changes to the menu and this year’s additional work of jarring the salsa things have only gotten busier, and right now they show no signs of slowing down. As for how it feels to have their product sold in stores, Marie says it is still somewhat surreal but that it hasn’t gone to anyone’s head.

“We’re just the same people doing the same things that we’ve been doing,” she says. “But now you can get the same great taste at a number of different locations.”

Maria’s House Made Salsa comes in four flavors – Mild, Roasted Habanera, Roasted Habanera with Mango and Black Bean with Roasted Corn – and can be picked up Joe’s Produce in Livonia, Holiday Market in Royal Oak, Kim’s Produce in Detroit, Honeybee Market in Mexicantown and Saturdays at Eastern Market. It’s also available at Maria’s Comida (11411 Jos. Campau) so stop by and grab a jar.

One Response to Maria’s Comida expands into the salsa business