Marijuana dispensary is one toke over the line 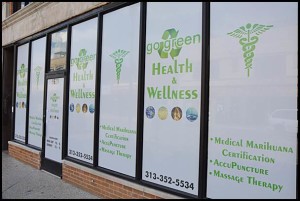 A would-be marijuana dispensary on Jos. Campau was closed down this week because it didn’t get the proper licensing required.

By Charles Sercombe
A would-be medical marijuana dispensary operator jumped the gun too soon.
Waaay too soon.
On Tuesday afternoon, Hamtramck police shut down a business called Go Green at 9629 Jos. Campau for operating without a business license and storing medical marijuana in a back room.
The business made its first jump ahead by opening its doors last week without first getting a business license, said Community & Economic Development Director Kathy Angerer.
She said a license was denied because the front windows were blocked out with promotional signs, which violates the city’s signage code. At least 70 percent of the front windows must remain clear.
The second jump ahead was holding marijuana without first getting a license to be a dispensary.
Police Chief Max Garbarino said that when he and City Clerk August Gitschlag entered the store on Tuesday, “It smelled like pot.”
One thing lead to another, and a person there consented to allow the chief to look in the back room. Garbarino said there were about 20 jars filled with marijuana.
The person there said he was a caregiver but did not have his card to prove it. Officers confiscated the marijuana, and Garbarino said that even if the man can prove he is a caregiver, the marijuana will not be returned.
Criminal charges may result upon further investigation.
As for the prospect of this business – or anyone else – opening a medical marijuana dispensary, the chances are slim for any time soon.
Although the city has an ordinance regulating these businesses, Emergency Manager Cathy Square said she won’t allow any licenses to be issued until a city manager is hired.
Square said she wants a city manager to be in place to deal with this issue. As for when a city manager being hired on, that’s anyone’s guess.
There is a candidate in the running for the job, but Square said she can’t come to contract terms.
Square said the city’s finances are “too tight” to give what the candidate is seeking.

One Response to Marijuana dispensary is one toke over the line