Market owner gives thanks back to customers for Thanksgiving 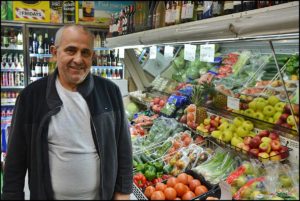 Mike Kizy, the owner of Sam’s Market at Fleming and Commor, is giving away 400 Thanksgiving meals next Wednesday (Nov. 21) to show appreciation to his customers.

By Charles Sercombe
For 45 years Mike Kizy and his family have operated Sam’s Market at Commor and Fleming.
It’s probably not going out on a limb to say that this is the longest operating family market in town. Many of Hamtramck’s longtime neighborhood grocery stores have closed during the past 10 to 20 years.
There is now a whole slew of new independently owned markets throughout town – most of which are owned by Bengali and Yemeni community members.
Kizy, who is now 62 years old, credits his business longevity to constantly upgrading his store, adding new shelving, new flooring, new coolers and keeping the place clean and pleasant.
It’s a one-stop shop here where you can get fresh produce, meats and chicken, canned goods, beverages, household supplies – you name it.
Many folks who shop here stop by daily, picking up food for what they will make for the day.
In a gesture of thanks and support, Kizy will once again hold a Thanksgiving meal next Wednesday (Nov. 21), starting at about 1 p.m. and going until the food runs out.
“We love our people, and we try to give back to them,” Kizy said.
Kizy’s wife, Terry, is making 400 takeout dishes, so there should be plenty to go around.
As for the name of the market, Kizy said it was named after his older brother, who is now retired.
As for the future, it looks like Kizy is the end of the line. His kids are doctors and professionals and have no desire to take up the family business.
Kizy has no retirement plans.
“They (the customers) depend on us, we depend on them,” Kizy said.