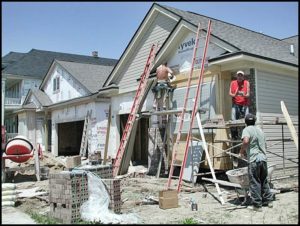 A recent study performed for the city says rental dwellings are in high demand, and that 10 new houses could be built each year for the next five years to meet that need.

By Charles Sercombe
As many landlords know, Hamtramck housing is in high demand.
The demand is so great, a recent study performed for the city recommends building 10 new houses a year for the next five years.
A couple of weeks ago, Sharon Woods of LandUse USA talked to the city council for about 45 minutes about the study’s findings.
The full report is over 300 pages long, and is available for public review. A shorter version is also available.
The only downside to this ambitious goal for new housing is trying to convince people who own vacant lots to actually invest here and build one or more houses.
The study recommends the construction of different style dwellings, all with two or more units.
The ideal location for this housing boom would be in the southend where there are large stretches of empty lots where once houses stood.
Projected rents are anywhere from $500 a month all the way up to $900.
From anecdotal evidence, and talking to several landlords, the average rent is currently about $600 a month here in Hamtramck.
Hamtramck has long been known for its two-family rental units. The city has also been a favored community to live in for Wayne State University students who can’t afford housing near the campus.
Now, it appears, a number of young professional people are also being squeezed out of Detroit’s midtown, where rents have gone up astronomically.
The study took a look at who is currently living here and the languages being spoken.
Much like the city’s public school district, there are a variety of languages you can hear on the streets.
Most residents, almost 7,000 out of the estimated 22,000 people who call Hamtramck home, speak English only. The next highest languages spoken are Arabic, coming in at 5,115; Bengali at 4,565; and Russian/Slavic at 2,700.
There are 12,650 residents here who were born in this country, while the remainder of the 22,000 people living here were born elsewhere.
City Manager Kathy Angerer praised the report, and said it will be an important tool for the city to use.
“This is one piece of our economic development plan,” she said.
Angerer added that this was not to be a “stuffy study that will sit on the shelf.”
October 11, 2019