Mayor gets tapped for top position in MML 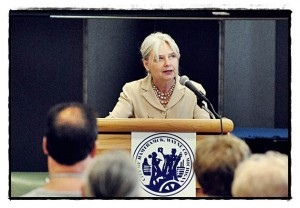 Mayor Karen Majewski better rest up and get ready to spend some time on the road.

Besides holding down a fulltime job and attending numerous meetings as mayor, Majewski now has another job: She has just been named president of the Michigan Municipal League.

The MML is a powerful non-partisan organization in the state that advocates on the behalf of communities, especially by keeping a sharp lookout on bills winding through the state legislature that might have an adverse effect on cities.

We got the mayor to spend a few minutes and discuss – through e-mail – what this appointment is all about, as well as what issues are facing the MML and what her appointment might mean to Hamtramck.

Here is what our mayor had to say:

“My duties as MML President include presiding over meetings of the Board of Trustees, sitting on various committees, presiding over the annual convention and capital conference, testifying as needed before the state legislature on issues relevant to cities and villages, participating in other public events and media opportunities on behalf of Michigan’s municipalities, attending yearly regional meetings throughout Michigan and anything else the MML staff asks me to do in advocacy for our cities. As President, I also attend the National League of Cities’ two yearly events (including a convention in Phoenix next month.)

“My term lasts one year. Last year I served as vice president, which involved some of the same duties– testifying, sitting on committees, making public statements, serving on the Board of Trustees. The vice president always becomes the president, so you get some practical experience in the year before your presidency.

“The MML is recognized as one of the most active and progressive of the state municipal leagues. Our staff, with offices in Lansing and Ann Arbor, is also recognized for their skillful and successful advocacy in Lansing.

“We have a good relationship with Gov. Snyder, which is one of the reasons the new Emergency Financial Manager law was modified from the governor’s original version.

“The reductions in revenue sharing were modified and his financial requirements were made more city-friendly.
“Act 312 (Editor’s note: This refers to the grievance procedure for public employee unions) was modified to reflect the changes that for decades cities had been calling for.

“The MML has been able to exert a lot of influence in Lansing, and as bad as things seem, if you remember, they were supposed to be much worse. In the coming year we’ll have a BIG fight on our hands, over the elimination of personal property tax.

“We’ve been working on that message for awhile now, and things will probably be coming to a head in the next year.
“The importance of the MML as an influence on state-wide policies and priorities puts Hamtramck in a prominent and respected position in the coming year.

“This is especially important when some people are asking why we should even exist. It aligns us as a progressive voice for cities, gets us in the door of the governor’s office and the legislature, not just as another city, but as the city that’s the spokesperson for ALL our cities.

“Personally, I think that may have been part of the unspoken strategy that helped put me in this position — it’s a little harder to dismiss us as expendable when we are the voice for everyone.

“Also, the MML has formulated a model set of policies for 21st century cities that’s focused on place-making, with qualities like walkability, diversity, public transportation, arts and culture oriented development, etc. at the forefront, and Hamtramck is a perfect example of that model of urban vitality.

“So, with Hamtramck at the head of the MML, we have a lot of visibility and increased legitimacy, not to mention the opportunity to continue to work with the MML to advocate for policies and legislation that reflects our issues and our needs.

“Even when the year of my presidency is done, our influence will stay strong in the organization, because past presidents participate in board meetings, are still called on to testify, and serve on certain committees. Those relationships also continue, even when past presidents no longer serve in public office.

“One thing I’ve been disappointed about is that our newest batch of councilmembers haven’t been attending the MML conferences and educational workshops.

“In any profession, one of the most important things you have to do is join your professional organizations, meet the people who work in the same field you do, form relationships with your colleagues, continue learning about current developments, get ideas from what your colleagues are doing, and work for the betterment of your profession.

“With the exception of Councilmember Catrina Stackpoole, none of the current councilmembers seem to understand these basic principles and strategies of professional development, which has been quite frustrating for me.

“We have this opportunity to make Hamtramck one of Michigan’s important voices for cities. I would hate for that to fade away.”