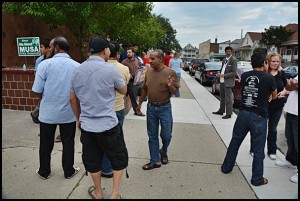 It looks like it’s a replay of four years ago for Karen Mayor and mayoral wannabe Abdul Algazali.

The two will once again square off in the November General Election.

Algazali, who is a city councilmember and mayoral pro tem, finished first in Tuesday’s Primary Election, garnering 731 votes and beating Majewski by 61 votes.

Four years ago, Majewski beat Algazali in the November election by 124 votes, which was considered a slim margin at that time.

Gordon came in fourth with 251 votes while Ulaj finished a distant third with 363 votes.

It was predicted by a number of longtime political observers that Ulaj stood a good chance of finishing in first or second place.

Majewski said she never doubted she would survive the primary.

“I wouldn’t be in this race to begin with if I didn’t think I’d win,” she said.

Gordon, who gave up her seat on city council to challenge Majewski, said felt “hurt and unappreciated” in her loss.

She is also asking for a recount of the election results, but not because she thinks she might win the election.

There had been widespread rumors of election fraud and illegitimate ballots cast.

“I just want to make sure everything is on the up and up,” Gordon said.

She also added that people approached her and offered to have absentee ballots marked with her name, but for a price.

Deputy City Clerk August Gitschlag said there are 46 absentee ballots that have been tagged as “challenged” because they were submitted by people not authorized to do so.

State election law says that the person who votes absentee can mail the ballot back, return it themselves or have an immediate family member do so. There were three people who did not meet those qualifications who submitted absentee ballots.

Gitschlag would not release the identity of those people. The matter has been turned over to the Police Department for further investigation. Police Chief Max Garbarino said the matter is still under investigation and could not comment on it.

Councilmember Algazali has refused to comment about his campaign when questioned by The Review and could not be reached for possible comment after the election.

He also did not appear at a mayoral candidate forum a few weeks ago.

In the two council races a familiar name in Hamtramck politics emerged as the top vote-getter in all of the election. Andrea Karpinski, whose father Joe Karpinski is a former councilmember, topped all the candidates with 837 votes.

Councilmember Mohammed Hassan was the only incumbent seeking re-election, which he did easily and looks set to coast into a second term.

Here’s how the two council races broke down:

In the election for the three seats that are four-year terms, the top six candidates will face-off in the November General Election. They are:

The results for the remaining candidates for the four-year term are:

In the race for the one seat with a two-year term, the two top vote-getters who will face-off in the General Election are:

The remaining candidates finished in this order:

There were a total of 2,111 votes cast, which is about 500 more than usual for a primary election with just local races involved. Nearly 800 absentee ballots were cast.

Election results had not yet been certified by the time The Review went to press on Thursday.