Mayor recaps a year of many ups and downs 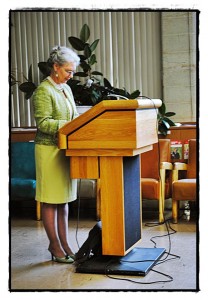 Perhaps you’re perfectly fine with your city as it is.

Perhaps you’ve got no complaints at all. Perhaps, for you, it’s a bed of roses. Nirvana. Heaven on 2.2 square miles of earth.

That might go a ways toward explaining why you weren’t there for the single most important political speech of the year, every year. That being the mayor’s State of the City summation.

You weren’t there – were you?

Perhaps it could all be blamed on the fact that it was held on a sunny Sunday summer afternoon. Perhaps that would also explain why the only current city council member present was lame duck Catrina Stackpoole, who (in her capacity as mayor pro tem) still cared enough to be there.

Granted, this was not a City Council function – but wouldn’t you think they’d still want to be there, given the range of issues that the town faces?

Nor was the rest of the city well represented, beyond City Manager Bill Cooper. Curiously absent were a number of other top city officials.

Disc golf? Beach blanket bingo? Making castles in the sand? Where, oh where had they gone?

For those few who were there, whether in official capacity or as interested citizen, there were impassioned words aplenty from the mayor, who – it stood out, particularly in an emotional ending – still does care, and very much.
Or maybe we’re being too harsh. There’s no way to tell.

Nevertheless, despite the sparseness of the audience, the speech did indeed commence around 1:07 p.m., and lasted about 40 minutes. To begin, the mayor gave a multi-cultural welcome, and talked briefly about what makes the city what it is – the people that comprise it, of course.

She then acknowledged a number of police who had retired in the past year.

Then, it was on to a lengthy recap of those past 12 months. She mentioned the new Historical Museum, and the grants that brought it to fruition. She also noted the Veterans Park grandstand, and the fact that the city was just rated Michigan’s “most walkable” (by a website called walkscore.com).

She noted the town’s festivals, each individually, and the people who make them work, beginning with the Paczki Day Fest, the brand-new Harvest Festival, the Blowout, then mentioning St. Florian’s Strawberry Fest, the Bangladeshi and new Arab Festivals in turn.

She saved special mention for the longest-running of the bunch, the famed Labor Day Festival, and singled out committee co-chairs Kathleen Bittner and Rachel Srodek for their work to keep it going where, before last year, it actually seemed in some danger of not happening at all.

She moved on quickly thereafter to some of the bigger news stories and challenges, particularly the resolution of the interminable GM plant revenue-sharing battle with Detroit. She singled out City Manager Bill Cooper, Finance Director Nevrus Nazarko, and City Attorney Jim Allen for their yeomans’ duties on getting a legal deal done. She also noted the new vehicles, including the Chevy Volt and the upcoming Malibu and Impala models, which are (or will soon be) manufactured there.

On a similar, yet opposite, note, she acknowledged the loss of the American Axle, but reassured listeners that the city remained very active in trying to court, and keep, businesses both old and new. She singled out Kowalski Sausage (with their seemingly endless threat to bail on the city), who once again was moved to stay. Some suggest, by way of further reduced taxes.

The mayor then went on to cite some of the businesses that have either expanded or opened, including Day’s Fashions, European Market, Maria’s Comida, Hamtramck Recycling, the Hanley International Academy, and Hamtramck Hoard House.

She had saved the most appetizing businesses for last, as she then made special mention of the many eateries that likewise started (or re-started), many of them Banglaseshi (ZamZam, Alladin, Bonoful, and the soon to re-emerge Taj Mahal) or Arabic/Middle Eastern (Sultan Café, Conant Café), as well as The Clock’s rebirth, and the upcoming Ootie’s.

And, she mourned the loss of the venerable Under the Eagle Polish Restaurant, as well as Kopytko’s Market, which also shuttered up for good during the past year.

She mentioned other exciting projects as well, notably the long-stalled Hausner Building project, as well as the Vet Park Lofts.

Other highlights included an imminent $1 million grant from the U. S. Environmental Protection Agency, an independent city website just for economic-related news, and a future streamlining of the city’s application and permit processes.

The mayor also touched on the physical condition of Hamtramck, from planter boxes, to trees, to sprinklers and more related to the beautification, safety and general desirability of the city. A $15-plus million dollar HUD grant to help buy, get rid of, or otherwise manage older houses and structures was made mention of.

It was in her closing paragraphs that she dug in, acknowledging “the cycle of drama we regularly face (that) drains our people of good will and motivation, and keeps us just one step ahead of the bullet,” and suggested “changes to the organization and conditions of employment in our city departments” to “make best use of the talent, skill, and dedication that resides there.”

She went so far as to suggest the need to also “think… about new ways to share some services, processes, and capacity with other units of government or service providers,” perhaps a veiled reference to the very real possibility, which now looms over the city, of a second dance with a state-appointed EFM. Perhaps a call to remember how much that cost the city last time?

In the end, she had to pause and collect herself to remind the faithful that, “…despite everything that’s been thrown at us, we are still here….live and kickin’… still Hamtramck.”

If only everyone cared as much. 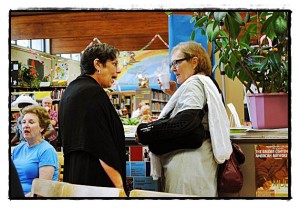