Mayor shares her dual passion for clothing and boosting Hamtramck 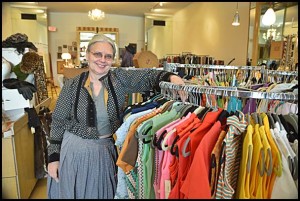 Mayor Karen Majewski has a love for vintage clothing and promoting Hamtramck. You can find both at her new story, Tekla Vintage on Jos. Campau.

By Mike Murphy
Special to The Review
One might say Tekla Vintage is a clothing boutique of many distinctions.
First of all, “Tekla” is a distinguished name attached to many Polish women in the 19th century, but no longer heard very often and ripe for revival.
Mayor Karen Majewski has reasons for naming her new store after many Polish great-great-grandmothers.
“It’s got balls,” Majewski said about the name. “It’s got weight. It’s old fashioned and it’s not prissy. It expresses the store.”
Second, the new store at 9600 Jos. Campau offers a wide selection of vintage clothes, hats, and accessories for women and men picked out especially by one of Hamtramck’s most distinguished women, namely the mayor.
It may come as no surprise to many residents that Majewski chose to locate her first all-out venture into the world of retail business in what she considers one of Michigan’s most distinguished cities.
“I’m putting my money where my mouth is,” Majewski said. “I want to set an example, and I hope this sets a precedent. It’s up to us to make Hamtramck something better.”
For Majewski, locating a second-hand vintage clothing store in the town she governs reflects the way she feels about Hamtramck as much as her long-held interest in vintage clothing.
“It is all about seeing the beauty and the value in things that other people have thrown out and discarded,” said Majewski  — who grew up in Chicago where she chose her mother’s vintage clothes over the fashions of the day — about her dual mission of opening a quality vintage clothing boutique and boosting Hamtramck. 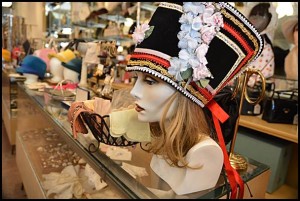 “The beauty is undervalued, and frequently overlooked or discarded,” she said.
The building that now houses Tekla has a long history, and Majewski said she kept that in mind in the ways she remodeled the store after she bought the building last May.
In 1913, Lendzon’s Dime Store opened its doors on the Jos. Campau site. That was long before it became Cody Hats in the 1960s. Fortunately for Majewski, the owners of Cody left behind hundreds of hats, some jewelry, and other accessories, much of which now qualifies as vintage apparel and will be kept in circulation.
And while the mayor has hired two part-time employees and can’t be at the store all the time — she works at the Institute for Research on Labor and Economy at the University of Michigan in Ann Arbor on top of her mayoral duties — Majewski does her own after-hours “picking” to supply Tekla with inventory and thoroughly enjoys her time spent as a shopkeeper.
“I am here as much as I can be,” Majewski said. “There is no more entertaining place to do business. You see the street people and all the diversity on the other side of the window. I would never consider opening a store anywhere else.”