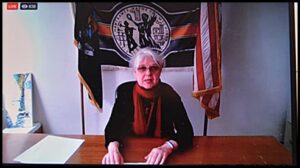 By Charles Sercombe
Mayor Karen Majewski has joined other mayors across the country in condemning the use of federal officers to quell protests.
In a number of instances that has alarmed civil rights advocates, the officers are wearing military gear with no identification, and have also refused to identify themselves when confronted by the public.
In what appears to be a first-ever for a Hamtramck mayor, she recently issued an executive order that calls for Hamtramck police to intervene and make arrests for anyone claiming to be a federal officer but refuses to identify themselves.
In her order she says she is:
“Condemning the use of unmarked, ununiformed, unidentifiable federal law enforcement officers to arrest, detain, remove or otherwise control peaceful protestors; (2) Instructing Hamtramck police personnel to arrest and detain anyone claiming to be a law enforcement officer who cannot or will not provide proof of same and (3) Directing that the city attorney prosecute to the full extent of his authority any individual claiming to be a law enforcement officer who refuses to provide proof of same;
“Whereas, President Donald Trump has threatened to violate the Posse Comitatus Act of 1878 in Michigan by deploying military personnel on American soil against American citizens;
“WHEREAS, President Donald Trump has deployed unmarked, ununiformed, unidentifiable federal law enforcement personnel to perform the local law enforcement function of maintaining the public peace;
“WHEREAS, the actions of these federal law enforcement officers violated the constitutional rights of individuals exercising their First and Fourth Amendment Rights in Portland, Oregon;
“WHEREAS, the Hamtramck City Charter Article 9-01 and the prior resolutions of the Hamtramck City Council provide that I take command of the police department to maintain order and enforce the laws;
“WHEREAS, the Hamtramck City Charter Article 9-01 requires that I perform acts required by the state and federal constitutions which guarantee the right to free speech, peaceful assembly as well as the right to be free of unlawful searches, seizures, and arrests which I find will be threatened by President Trump’s unlawful deployment of federal personnel onto our streets;
“Now, therefore it is ordered as follows: 1. The Hamtramck Police Department shall arrest and detain for disorderly conduct (or any other applicable offense) any individual claiming to possess
law enforcement authority who refuses to produce proof thereof upon reasonable request.
“The Chief of Police is hereby directed to publish and distribute to all HPD personnel a written order requiring officers under her supervision to abide by this resolution without exception;
“2. The Hamtramck City Attorney shall prosecute to the full extent of his lawful authority any individual arrested hereunder;
“3. The police chief and city attorney shall keep the mayor and city council reasonably informed of any actions their respective departments take pursuant to this order.”
Sept. 4, 2020

2 Responses to Mayor takes a stand against federal intervention