Mayoral forum sheds light on candidates in exhausting Q and A 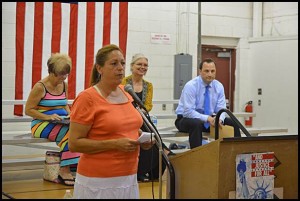 The mayoral candidates squared off last Friday at a forum sponsored by the Southend Block Club, with club President Susan Dunn moderating.

Hamtramck’s one and only candidate forum didn’t have many people show up, but what it lacked in size it made up in spirit.

About 30-40 people attended the Southend Block Club’s mayoral candidate forum on Friday evening. The event lasted for about two hours, and a handful of people kept the questions coming to the candidates.

City council candidates were not included in this forum.

Councilmember Abdul Algazali, who decided not to seek re-election on council and instead run for mayor, was the only candidate not to show. He did not provide organizers of the event a reason for not attending.

Mayor Karen Majewski is facing three challengers in the upcoming Aug. 6 Primary Election, which besides Algazali includes Councilmember Cathie Gordon and the owner of The Review newspaper, John Ulaj.

Most of the questions were directed at Ulaj. After the two-hour forum, both the candidates and audience seemed to be mentally drained from the length of the event and never-ending questions.

The candidates began with introductory speeches that lasted about five minutes each. The floor was then opened up to the public for questions to the candidates.

None of the candidates appeared to win a solid victory and none seemed to make any major gaffes – but then again there are probably supporters for each candidate who think otherwise.

Highlights of the night, we’ve got them:

Ulaj was the first to go, and repeated his campaign slogan of “advancing Hamtramck” – which he added is “my basis for transforming this city.”

He touted his experience as a businessman, and made a bold promise to guarantee housing values to increase by 25 percent by the end of his first term.

The statement prompted several follow-up questions from the audience over just how he will accomplish this.

Ulaj also promised to beef up the Police Department, have officers walk beats and ride bicycles around town. He said by increasing the sense of safety and tackling blight, economic development will happen. That combination, he said, would lift property values.

“I have the best interest” for the city, he said. 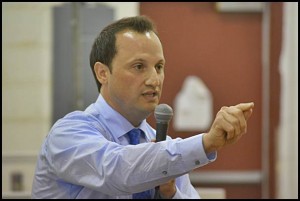 She said that with an emergency manager now in charge, the next year will be “crucial.”

Gordon said the city charter limits what the mayor can do, and it was actually the city council that got things done, although she did say she was the “minority” voice on the council.

As mayor, Gordon said there will no longer be “chaos” in council meetings. She added that she will fight to prevent Hamtramck’s fire and police departments from being merged with Detroit.

Although she did not mention Ulaj by name, she said talk of increasing property values are “empty promises.”

“How can any candidate make these promises considering the charter does not empower that position of mayor?” Gordon said.

She continued: “Are these candidates promising to write checks out of their personal account? I think not. No power, no money equals empty promises.” 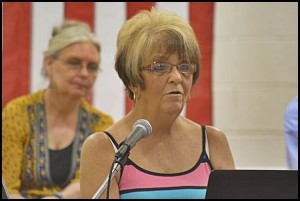 Steve Shaya, the Director of Public Works, was the first to start off questions from the public. He asked Ulaj to explain the role of the mayor and how he would go about making repairs to the city’s infrastructure.

Ulaj said it boils down to “mathematics.”

“The first thing I’m going to do, along with the city council, is to eliminate Platinum Landscaping that’s been ripping the city off,” Ulaj said to a scattering of applause.

Shaya is a former employee of Platinum, and he now oversees work the company does for the city. Ulaj later said the company has been overbilling the city.

Ulaj blamed the city’s financial woes on a “dysfunctional” council.

“You have dysfunctional decision-makers in power,” he said. “That’s why you are bankrupt.”

As for what the mayor’s role is, Ulaj said it’s to get along with the council and “facilitate your lives.”

Ulaj was once again asked how he would bring about an increase in property values. He said it’s about making the city safer and more desirable for people to live here instead of the suburbs.

“Our job is to make people feel safe,” he said.

Ulaj said that Hamtramck has the opportunity to become the “Mardi Gras of the Midwest” – an apparent nod to the city’s annual Paczki Day celebration which falls on Fat Tuesday.

He was also asked how he would attract businesses to empty storefronts on Jos. Campau. Ulaj again stressed it comes down to public safety and eliminating blight.

He also took a shot at the city’s Downtown Development Authority, calling it “dysfunctional.” He said he would “restructure” the organization. 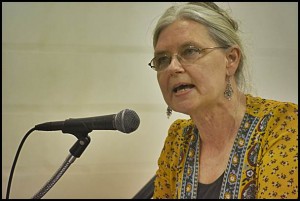 As for bringing in new businesses, Majewski said she and her husband have put their “money where our mouth is” by purchasing the former Cody hat store on Jos. Campau. She said she plans to open the shop in the coming weeks.

Gordon said Ulaj’s criticism of the DDA is “uninformed.” The group, she said, is made up of volunteers, and the public “should be thanking them for their time.”

Bev Tran, who is running for city council, asked Ulaj if he is aware that all of Wayne County will take a credit hit now that Detroit has filed for bankruptcy.

Ulaj said Wayne County deserves what is coming because of poor management.

“I’m not focused on Wayne County,” Ulaj said. “I’m focused on this city.”

As for economic development, Gordon said “I don’t have a solution for that.”

Majewski responded to Ulaj’s promise to raise property values, saying the real issue is the Headlee Act and Proposition 2, which severely limits how much municipalities can collect in new taxes.

She said local and state leaders are considering ways around the laws, and that means the city needs someone with her experience.

Ulaj still stuck to his promise of raising property values, saying more properties need to be “flipped.”
He stressed that the way to move the city forward is through “conviction and innovation.” 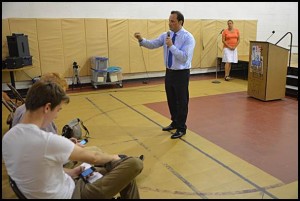 Majewski said the city needs to build on its assets of community, sense of identity and walkability.

“These are things other cities are trying to build up to,” she said.

Gordon said with an emergency manager here and state supervision for the next two years, “there isn’t much we can do. I wouldn’t even put a plan together because it’s useless, it means nothing.”

What she would do in the meantime is market the city.

“After marketing what we have, change will come,” she said.

Gordon also added that it would be “an effort of futility” to put together a short-term plan for the city because of the emergency manager.

Andrea Karpinski, a candidate for city council, asked all three candidates about the future of the fire department and bringing back ambulance service to the department.

(Editor’s note: Ambulance service is being provided by Detroit Medical Center at no charge to the city.)

Gordon said that decision is not up to local officials now that an emergency manager is in charge. She again stressed that she would fight against merging the fire department with Detroit and Highland Park. Instead, she would rather have the two departments merge as one in order to keep the local employees.

Majewski agreed with Gordon, saying “We’re not in control of those decisions right now.” 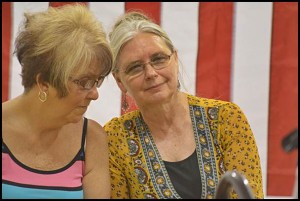 However, she said she would work to influence the emergency manager.

Ulaj said he is glad that DMC has taken over the ambulance service, saying the city now gets state-of-the-art service. He said 80 to 90 percent of the fire department’s runs were for ambulance service.

Subsidizing that cost and keeping a department of 30 full-timers is too costly, he said.

He said the fire department can be staffed with fewer full-time firefighters now that ambulance service is being provided by a private company, and that in turn frees up money to hire more police officers.

“If we just learn how to balance our purse, people, we wouldn’t be in the predicament we’re in right now,” he said. 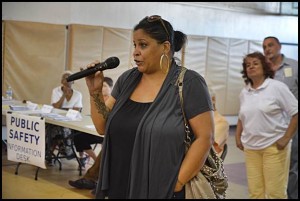