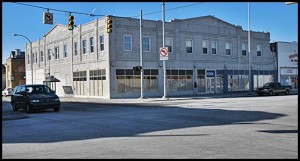 This building at Jos. Campau and Caniff will be re-designed as a mosque and will feature minarets on top.

After being denied twice, the proposed mosque at Jos. Campau and Caniff can go ahead with new design plans.

Several months ago the leaders of the Al Islah Mosque were told to go back to the drawing board because they wanted to cover up most of the windows at the building.

That design did not conform to the city’s zoning requirements that say at least 70 percent of the windows in the commercial zone must be transparent. Mosque leaders came back and claimed that historically the building had fewer windows than it does now.

But Community & Economic Development Director Jason Friedmann said an old photo of the building confirmed that the existing windows had been there all along.

That meant the designer of the mosque had to come up with a new site plan to conform to the city’s requirements.

The city council approved the design at Tuesday’s meeting.

Friedmann said the design includes minarets on top of the building.

“It’s pretty interesting,” Friedmann said of the proposed design. “It’s going to make for a dramatic gateway into town.”

He said the exterior redo will cost about $275,000. Work will first begin inside the two-story building.

The location of the mosque has caused some controversy. It first had to receive what’s called a “variance” of use by the Zoning Board of Appeals because all buildings along Jos. Campau are designated only for commercial purposes.

A mosque, as well as other religious centers and non-profit agencies, is exempt from paying taxes.

The Zoning Board, whose members are appointed by the city council, approved the mosque. There are now three mosques in a one-block area at Jos. Campau and Caniff.

The mosques could have an impact on the Hamtramck Labor Day Festival. The alcohol drinking area — including the main stage — of the festival is in front of all three mosques which go from Caniff to Holmes St.

If the mosques object to the consumption of alcohol in front of their establishments, the festival will be forced to relocate the drinking area 500 feet north of Holmes St.