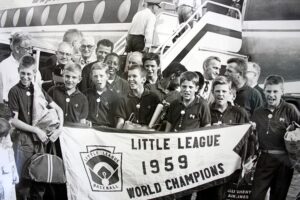 By Alan Madlane
Hamtramck’s heroes finally have some company.
The Little League World Series, first played between Pennsylvania teams in 1947, had only produced one other winner from Michigan in its 75-year history, and that team was the 1959 squad from Hamtramck.
Taylor North, a team from the downriver suburb of Taylor, beat a team from Hamilton, Ohio this past Sunday, Aug. 29, in Williamsport, PA, making them World Series champs.
The Taylor team faced a gauntlet to get to the top, including a team from recent powerhouse Hawaii that dealt them their only loss in the tourney. Taylor North then got revenge on Hawaii in the semi-final rematch, by a 2-1 score.
Hamtramck’s team won it all in 1959, while being led by the incomparable Art “Pinky” Deras, who, like many even today in Little Leagues, served as a dual threat by both hitting and pitching.
Deras, who is retired from the Warren Police Department, just turned 75, and had this say to The Review about the new champs being only the second team from Michigan to win the series:
“I’m surprised it took so long! I never thought it would take 62 years, but I wish them the best.”
That’s something you never see done at the Major League level, save for recent Japanese phenom Shohei Otani of the Los Angeles Angels.
The folks over at Historic Hamtramck Stadium weighed in on Taylor North’s accomplishment in a statement, while feting the local team that “won the 1959 championship in Williamsport on August 29, 1959 – 62 years ago (to the day).”
The Hamtramck Historical Museum also acknowledged Taylor North’s win, while reminding everyone of Hamtramck’s team as well, saying “Congratulations go to the Taylor North team. … But for us, the World … Champs will always be the 1959 Hamtramck Squad.
“They brought joy to the city in capturing that title, which hasn’t been duplicated by any other team from Michigan until this year. So with all due respect to Taylor North, we tip our hats to Pinky Deras and the Hamtramck players who made sports history back in 1959.”
The museum then graciously extended an invitation to Taylor North to visit the museum, and swap tales of the twin conquests.
Michigan is one of only 14 states with at least one title team, and one of only nine states with at least two winners. California leads all US teams with seven winners; no other state has more than four.
But even that pales next to Taiwan’s 17 titles (all from between the years of 1969-96, with none since), or recent powerhouse Japan’s 11, including seven crowns since the year 2000.
Since they last won in 2017, Hawaii had then won in 2018; River Ridge, Louisiana triumphed in 2019; and then last year’s contest was scratched.
So, nice going Taylor, for making Michigan proud.
But also, for giving Hamtramckans a chance to relive that long-ago glory of their own, from back in a time when the sport – and a certain, storied Little League team — stood tall.
Posted Sept. 3, 2021

One Response to Move over Hamtramck, Taylor now also shares a part of Little League history