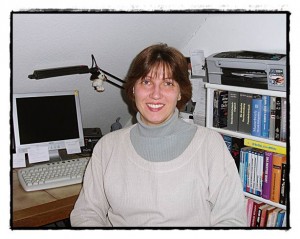 Who she is … Roxann Lee-Fiorello Busch is a former Hamtramck native, now living in Duisburg, Germany, who has just self-published her first novel, entitled “The Christmas Angel.”

A 1989 grad of Hamtramck High, she attended Northern Michigan University and then Wayne State University as well. She also worked at Detroit Edison and Thyssen Steel here in the area before marrying and relocating.

(Full disclosure: Our publisher apparently knows her stepfather, and possibly her mother too. Walt Disney was right: It’s a small world, after all.)

Is this the first book you’ve written? How long ago did you start work on it? When did you finish it (or the first draft, if you had multiple drafts)?

Busch: “The Christmas Angel” is my second completed novel, but the first that I (have) published. I started writing at the point that I decided to be a stay-at-home mom. I finished the book already two years ago, but since I was actively involved at the school the kids attend, I wasn’t able to spend the necessary time on editing / publishing, etc.

Earlier this year, I asked a friend to help me pull the book together so that I could do something before Christmas. While she was busy doing the best editing job she could, I started looking (on) the Internet for possible publishing houses. That was a disaster, because almost every good fit for my book wasn’t accepting manuscripts.

My friend finished her edits in July and I finished mine in October (remember I am playing mom in between writing). It was then that I decided to self-publish to finally get this moving along. Then I found Createspace.com, and decided to give it a shot.

Is it based on anything true-to-life? Or, where did you get the idea for the book? Did you outline the story first, and then fill it in? Or, come up with the beginning, or the ending, or for that matter the middle first, and then work out from there?

Busch: The novel itself is fiction, but the events that happen (besides Angel becoming a permanent fixture in Kersten’s life) within the book are very true to life. Many times we sail through life, thinking only about ourselves and forgetting about the things that are truly important. “The Christmas Angel” is a strong reminder of where our focus should be.

It is also important to say that I am a Christian with strong beliefs. I live in a world full of turmoil and I want peace. The idea for the book is based on Christian morals, even when Kersten, the main character, doesn’t always behave as a Christian should.

With that said, I can say that, yes, I did outline the book from beginning to end and I pretty much stayed with the story line. I didn’t budge on the story content when we started to edit.

Other than your editor friend, who did you show it to first after it was completed? What were the first comments you got from people in general?

Busch: My mother was the first person to read the book. She happened to be in Germany at the time of completing the first edit, and had the honors. She loved it, but of course, like all mothers, she is probably my biggest fan – even before I wrote a book.

Until now, I know several people who have read the book, and the comments have been rather positive. Even my stepfather read it, and loved the story. That was a very big compliment.

So you self-published through something called Createspace.com – can you describe that process? What were their comments, or what was their advice?

Busch: Like I said already, getting a publishing house to look at it was nearly impossible because they weren’t accepting manuscripts. I did go to one publishing house in Germany which accepts English books. They asked for the manuscript, but then decided it wasn’t their genre. And then I continued to be a mom, and the time slipped away.