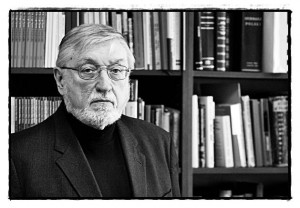 Dr. Thaddeus “Dr. Ted” Radzilowski is the Co-Founder and President of the Piast Institute here in Hamtramck.

Who he is: Dr. Thaddeus “Dr. Ted” Radzilowski is the Co-Founder and President of the Piast Institute here in Hamtramck. His C.V. is long and distinguished. He holds a Doctorate degree in History from the University of Michigan, and his specialization is Poland and other central and eastern European nations, prominently including Russia.
He has lectured in both Europe and North America, and has published over 100 times, including journal articles, scholarly papers and monographs. He is involved with a number of other organizations, including the University of Michigan (as a Visiting Research Professor) and the Polish National Congress (as the Michigan Director). He is a past president of the Polish American Historical Association, and is on the Editorial Board of the Polish Review.

Radzilowski has served as the acting director of the Immigration Research Center at the University of Minnesota, and, in 1999, was presented with the Cavaliers Cross of the Polish Order of Merit by then Polish President Aleksander Kwasniewski for his “distinguished contributions to the dissemination of Polish culture in the world.”
We sent him some questions, and he was kind enough to provide quick and timely responses.

Give us, please, just the briefest background on the Institute, its mission and purpose, and how you, yourself came to be involved with it, for the uninitiated. Is this the only Piast Institute to be found anywhere, or are there others in other cities, states, and/or countries? I see that Piast was the surname of the first Polish dynasty – is there any other significance to the name of the Institute, beyond honoring that heritage?

Dr. Radzilowski: Yes, this is the only Piast Institute in the U.S. We chose the name Piast because we felt that, if we are to tell the Polish story, we should start at the beginning. Piast is the name of the legendary founder of Poland, who gave his name to the first dynasty (ca. 966 ABE to 1385 ABE).

The Piast Institute is a national research, data analysis and policy institute for Polonia — the Polish Community in the U.S. Its key aim is to provide Polonia organizations and institutions with the tools and information they need to accomplish their goals and missions.

We are not in competition with any other Polish organizations. Our mission is unique. In the process, we seek to propagate the Polish Story in Europe and America. We also address, in a distinct way, the issues of the public perception of Poland and Polonia, and anti-defamation. In 2011, we spent three months in negotiation with Yahoo to eliminate words such as “Polish death camps” and “Polish concentration camps” from its stylebook, and to explain the importance of avoiding those words in their training protocols.

Last fall Yahoo, which reaches 345 million people per month, agreed to those requests. During the controversy of Jan Gross’ book “Fear,” we developed a highly acclaimed international symposium on the issue (see http://analysisoffear.com).

Does the Institute keep a regular schedule of events? I didn’t notice any listed under your Facebook page (and congratulations on keeping up a Facebook page, by the way). Do you get many calls or visitors, and if so, what are they usually inquiring of you? Do you maintain any kind of a library, or records library? Do you sponsor, or co-sponsor, other events outside the Institute proper? If so, what sorts of events are they?

Many of our events take place in New York, Seattle, Houston, Chicago, San Francisco, and Washington, DC.
We have an excellent research and reference library of several thousand books and files on all sorts of issues on which we are doing, or have done, research (about 20 linear feet worth).

We get questions by phone, letter or email several times a day about data, or historical or current information on Poland and Polish American topics.

What’s new with the Institute these days, or what’s being planned, or “in the works,” if anything? Your Facebook page, in addition to stating that you’re a “research service,” also (and primarily) indicates that you are a “market research consultant.” What does that normally entail? That is, what “markets” are people having you research for them, if I may, and what are they then doing with the research results after you provide them back to these clients? I assume that you charge for this service, but perhaps I’m mistaken?

Dr. Radzilowski: In addition to our historical research, we are a national Census Information Center. Also, we do research in a variety of other public and non-proprietary databases.

The CIC, or Census Information Center, is one of our most important and active departments. Among our capabilities and activities, I believe the CIC affords one of the most salient ways we are valuable to the Polish Community. No one knows Polonia as we do, nor has the tools to analyze it that we can deploy.

In 2005, we organized a demographic research center on the Polish-American population within the Piast Institute. In 2006, the center was named an official Census Information Center by the United States Census Bureau, with a special charge to study the Polish American Population. It is one of the 56 CICs in the country, and rated one of the best and most active in the U.S.

The Piast CIC has done a number of major studies, including a demographic profile of Polish Americans in the U.S., state by state, in 2007, which won recognition as one of the best studies of the year done by a CIC. Among our more recent studies is an analysis of the Polish-American vote in the 2008 presidential election, based on a survey of 900 voters and a study of over 60 precincts in six states. The study was commissioned by the Polish Ministry of Foreign Affairs.

In a follow up to the election study, we did an opinion survey of 1,400 Polonia leaders and activists in 44 states on civic and community involvement, ethnic values and current public issues. It was published as Polish Americans Today in 2010. It has since gone through three printings. Copies were obtained by the Polish Government and distributed to the Presidential Chancery, the heads of all Ministries and the leadership of the Sejm (Poland’s equivalent of our House) and Senate.

These include demographic and cultural analyses of ethnic, racial, and religious groups, alcohol abuse, and culture in several Southeast Michigan Counties for agencies which deal with drug and alcohol prevention, and also a study of the characteristics of young women aged 16-21 in three Detroit zip codes who have not completed high school.
We are currently doing an analysis of variable crime rates for Wayne County. We also do surveys on request at the local, as well as the national, level.

We do not usually charge for casual requests for information that take only a short time to answer. For longer and more complex requests, we do charge hourly for our work, but at rates far below normal for profit groups. And, we give a discount to non-profit organizations.

Since the market research we do is proprietary, we are under obligation not to reveal the specific nature of the surveys or the target groups.

The world is changing as we speak, and Europe, or the EU — of which Poland has been a member since 2004 – is already having grave financial problems with some of its member states. Does any of this influence any future plans for you, or the Institute, in terms of any direction you may want the Institute to go in the future, or any further services you may want to start offering to your usership moving forward?

Dr. Radzilowski: Our mission is of serving the Polish-American community. We do not expect, therefore, that the changes in Europe will significantly change what we do. It will mainly require us to keep abreast of the nature and meaning of the changes, so that we can accurately respond to the questions and concerns of the news media, students, Polish community and others we serve.

When that plane went down in Russia on April 10, 2010, that was carrying so many members of Poland’s government and other dignitaries, it must’ve been a shock. Did you have any extra duties or provide any out-of-the-ordinary services, related to that terrible incident?

Dr. Radzilowski: We assumed the task of organizing a memorial for those who had died so tragically. This work was done by Executive Vice President Virginia Skrzyniarz, and Father Bogdan Milosz of Queen of Apostles. Over 300 people attended the memorial service and procession at the City Hall and Father Milosz’s Church. We brought a representative of the Polish Consul General from Chicago to speak.

On a lighter note, do you travel much, to Poland or elsewhere? When was the last time you went to Poland? What in particular do you love about the country itself? What part(s) of the country were your own relatives from? Anywhere in Poland, or elsewhere in the world, that you still hope to get to see?

I have visited Poland over 20 times. My favorite place (and my favorite city in the whole world) is Krakow. It is a magic place. I was last in Poland three years ago, to give a paper in Lublin at the annual meeting of the World Society for the Study of Religion and Society.

I would love to re-visit Vietnam, where I served as a soldier. My service was with Vietnamese troops and I still mourn, daily, the fate of a Vietnamese soldier, Vu van Cam, who became a dear friend.

Please take time here to add anything you like that I didn’t think to address.

Dr. Radzilowski: I have not spoken much of the work that we do locally with the Hamtramck community through coalitions, such as the Hamtramck Drug Free Community Coalition and the Hamtramck –Highland Park Lead Abatement Coalition. These coalitions, which we either created and/or led, have contributed immeasurably to the welfare of our community. They are the work of my colleague, Executive Vice President Virginia Skrzyniarz.

In addition to managing the Institute and organizing its activities, she also acts as a consultant on both capacity building and management skills development to Polonia groups, and other local organizations and other ethnic groups.
She has worked with groups in three states. Her experience includes prior service as the executive director of two major non-profit groups in the Detroit area — one of which she founded.
Thanks so much for your time, Dr. Radzilowski.