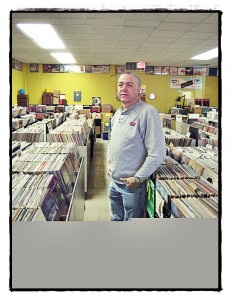 Who he is: Jeff Garbus is the owner of Hamtramck’s Record Graveyard, and has been in the record business for almost 30 years. We recently caught up with him to talk about his career in this field, the secret to his business’ longevity, and some imminent changes.

Hello, Jeff. You and I have known each other for a while, and I have to first give you a bit of a plug here: I’ve always found you to be one of the fairest paying record buyers around Detroit. Tell our readers, if you would, how you came to make what is, for most of us who love music, a job out of what I presume was initially a hobby?

Garbus: I just love music, and the physical record — the covers, and everything that goes with it. Growing up with records around the house, I always searched for great deals on records — being a teenager with very limited income. While out searching for records I liked, I would find great deals, too, on records I didn’t care for, so I started buying them to sell or trade to stores, and such.

Your store started life in Dearborn (Not ACTUALLY correct, as we shall see momentarily – Ed.). Give us a quick overview of the history of your enterprise, if you would – how you chose your original location, how and when you moved the store, and how it’s been being a part of the Hamtramck scene for the last “x” number of years.

Garbus: Actually, it started in Garden City, at Ford Road and Merriman, in the fall of 1981. I chose it for cheap rent, basically. Then, in 1989, I moved to Dearborn, where I sold out of several locations, and finally I have been in Hamtramck the past nine years, having opened here in late 2001.

It’s an odd business, in a way, and I’m sure you have an interesting story or two from over the years. It may be more about a particular record than a person. Also, what are some of the more sought after things nowadays – is there anything new that they’re clamoring for out there on the streets? What types of music do you enjoy specifically, or tend to keep around or have trouble parting with?

Garbus: In high school, I was a big Rush fan, after having seen them at my first concert — warming up for the warm-up band at the Michigan Palace. Years later Geddy Lee came to my Dearborn store, and was signing autographs. People were lined up around the block. That was special.

Mostly, collectors are looking for great but obscure music, records that were not hits necessarily. There are many independent Detroit/Hamtramck record labels that put out three, or, say eight, records with limited pressings of just a few hundred. True collectors search out, and pay for, these limited and rare recordings.
Personally, I listen to all kinds of music. I like 50s jazz, Blue Note recordings; lots of Latin funky soul-influenced music.

Now here’s the big bombshell – you’re planning to, hopefully, sell the store, or else close it, by the end of this year. As such, you’re dropping your prices to liquidate as much stock as you can as quickly as you can. Care to comment on what your plans will be after the new year? In the meantime, will you still be buying records from the public, and if so, for how long? Will you continue buying even after you no longer have a brick and mortar storefront, and if yes, how will people find you to sell their wares to you at that point?

Garbus: I am always buying records! I need records badly. In fact, this it partly why I am closing, as no one is selling records any more. The stock that is in the store at this time is going to be sold, marked down lower and lower until it’s all gone. I have a house on Carpenter St. which is an old storefront. I hope to open a small shop there in the summer of 2011. We will see. You can always find me online, on eBay – my eBay ID is Recordgraveyard1.

There was some excitement here a few weeks back, when the film “Vamps” decided to use your store as an interior location for filming. We saw Richard Lewis and Alicia Silverstone around, among others. What was the overall experience like for you? Would you do it again? I know they changed your store around quite a bit; were you satisfied that they put everything back where it belonged, and treated the place all right? How were the stars, director and crew to you personally?

Garbus: It was a great experience. The film industry in Michigan is happening. Alicia is a very down-to-earth person; nice. Richard was Richard; the director, Amy Heckerling, was a charm – so serious. It’s something I would love to do again; perhaps at the Carpenter shop? They had a crew come in the day before, to rearrange, and then a crew the day after to put the store back together. It worked out well.

Finally, now’s the time to thank anyone that you care to, or for that matter hurl insults or I-told-you-so’s. Also, maybe you’d care to say what else you might have done, had you not gone into this business. Any regrets, things you might have done differently, or for that matter things you’re glad you did the way you did? And, will you miss Hamtramck?

Garbus: It’s all good. I started out in 1981. I keep hearing that the economy hasn’t been this bad since 1981, which makes me laugh, since that means that I also started off during a major economic downturn, but I was at least able to still become kind of successful, thanks to record lovers everywhere. Keep on spinning!