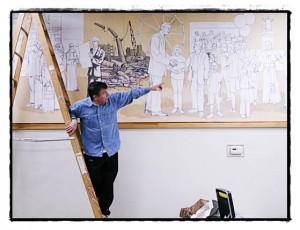 Hamtramck muralist Dennis Orlowski, shown here explaining one of his murals, says the recently commissioned street art does not reflect the community.

With the debate still going on over street art here in town, we asked Hamtramck’s most well-known muralist what he thinks of the fuss.

Fans of street art, you’re not going to like this, but then again, supporters of this kind of art say it should spark public discussion.

Muralist Dennis Orlowski said he’s not impressed with the work of the internationally-known artists who were commissioned to create the works, which can be seen on several buildings in town.

“To me, it’s like in your face,” Orlowski said. “There is no harmonization.”

Orlowski is a retired art teacher from the Detroit schools, and has been painting murals here in town, and elsewhere, for decades. His most well-known piece, locally, is in Pope Park, which depicts a Polish village square, populated with the likeness of local people from the 1980s.

Orlowski said public art should be “humble to the people of the city.”

The street art that was recently created, do not reflect life in the Hamtramck. Most of the murals are abstracts. One, though, has caused controversy. It depicts six cartoon characters carrying a coffin.

Some folks in town have demanded that this mural be removed because of the perceived negative connotations.

“That’s why most mural artists are older,” Orlowski said. “You have to live life to know what to put on a wall.”

The street art, he said, “is so generic. You see it everywhere.”

2 Responses to Muralist weighs in on street art debate