Need a tattoo fix? Hamtramck studio has you covered 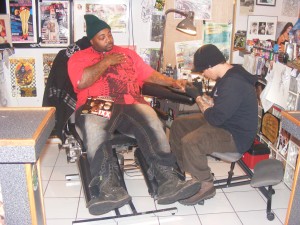 By Ian Perrotta
Review Staffwriter
Why is a tattoo better than money?
The answer, according to tattoo artist Timm Nowakowski, is simple:
“A good tattoo will get you through bad times with no money better than times with money and no tattoos.”
With that in mind, maybe it’s time to take a closer look at Twisted Fix, the tattoo shop located on the northend of Jos. Campau. When the guys there aren’t honing their video game-playing skills, they’re busy fixing up some twisted tats. And their next canvas could be you.
If you’re a bit reluctant to go under the needle, don’t worry because you can always get the next best thing: your face, tattooed on someone else. Right now the studio is running a special on portraits, and for just $100 they’ll ink a copy of a photo onto just about anywhere you want – and maybe even some places you wouldn’t.
Whether it’s Nowakowski or Twisted Fix’s other artist Lyman Woodward carving out your new piece, you’ll be in good hands. Literally. Both are classically trained in the fine arts, with Woodward going to school at Vancouver Film School for classical animation and Nowakowski attending the College of Creative Studies, taking classes in fine arts. But while those pedigrees may be impressive, they don’t cause a pretention that turns away potential business.
“Day-to-day, hearts, butterflies, roses and names – they pay the bills,” says Nowakowski, who is also a former Hamtramck City Councilmember. “But I get paid to draw on people, so I’m not gonna complain about that.”
In fact, with good hours, interesting clients, and a workday that never gets old, there is little to complain about in the industry. Perhaps one of its most rewarding aspects, according to Nowakowski, is the collaboration between artist and customer. While most art is approved-of only after it is made, because a tattoo is permanent customers are actively involved in the design process.
“It’s a lot less pretentious than other forms of art. There is no trying to figure out what you mean. People come in with an idea or a vague conception, then you have to find the middle ground between what you as an artist can do and what they as a customer want,” he says. “And they’re not afraid to tell you if they hate it. It’s a very honest form of art.”
And honestly, it’s not just for criminals and sailors anymore, either. Doctors, lawyers, police officers – even some elected public officials – they all get tattoos. Anyone aged 16 (with parental permission) on up can get one, and some clients have even gotten their first tattoos after their 70th birthday.
So why should you go to Twisted Fix and get your tattoo when you can get scratched at a tattoo party for a hot $20? The answer lies in the question. Unlike most states, Michigan does not regulate the sale of tattoo supplies, which means that any amateur with a “gun” – professional artists call them “machines” and will be quick to tell you that “guns kill people, tattoo machines make them prettier” – can set up shop in any dirty basement.
“If someone at a party told you they would cut your hair for five bucks, you’d probably say no,” said Nowakowski. “Tattoos are permanent. That’s why we have health inspectors and regulations. We’re a very clean and safe shop. And you won’t regret our work.”
Twisted Fix is located at 11651 Jos. Campau and is open Monday through Saturday from noon until 9 p.m., and on Sunday from noon to 6 p.m. Piercings are also available by appointment.