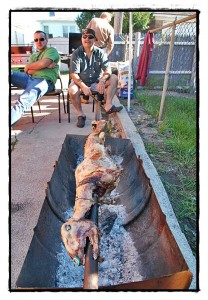 Yes, that's a lamb being cooked.

As everyone knows, Hamtramck is a melting pot of cultures.

But it’s also true that the varying ethnic groups in the city rarely melt together, so to speak.

Not so on Zinow St.

That bugged Gordon. He faced the same situation when he lived in St. Louis, and turned that around by starting up an annual neighborhood barbecue. Sharing food, drinks and laughs is a surefire way to bring people together.

So, he duplicated that tradition here on Zinow.

“I realized we had many nationalities on the block,” Gordon said, “but there really wasn’t a community on the block.”

Well, the folks on Zinow have come a long way. Last Saturday, dozens of neighbors gathered for the fifth year in a row for their “Annual Zinow International Barbecue.”

The food table was like a mini United Nations, crammed with specialties from Poland, Bangladesh, Bosnia and who knows where else.

In the back of the lot, a sheep carcass was roasting over an open spit. Yes, a complete lamb with head and eyes intact. If you were squeamish, it probably wasn’t pleasant to look at it, but the aroma sure was appetizing.

“And there wasn’t one scrap left,” Gordon said.

Gordon has set his sights higher.

He is the chairman of city’s Human Relations Commission, and he wants to help organize similar neighborhood get-togethers throughout the city.

“It’s brought people together, and I’d like to get more of these things going,” he said.

Hamtramck is coming together, one block at a time.