New council and mayor take the oath of office 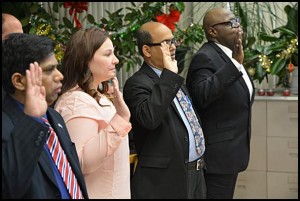 The New Year in Hamtramck started with the usual celebrations and also uniquely to Hamtramck, the inauguration of newly elected officials.

This election year produced a bumper crop of new city councilmembers. Andrea Karpinski, Abu Musa and Titus Walters are all serving their first terms, although Musa is only serving the remainder of former Councilmember Cathy Gordon’s seat.

Gordon resigned from the city council to challenge Mayor Karen Majewski. She lost that bid, and quit with two years remaining in her post.

Also leaving the council were Tom Jankowski, who did not seek re-election, and Abdul Algazali, who also challenged Mayor Majewski but lost. 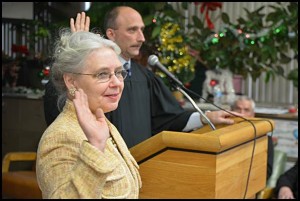 Mayor Karen Majewski takes the oath of office for her third term as mayor.

Mayor Majewski was re-elected to a third term, and Councilmember Mohammed Hassan won a second term.

They all took the oath of office on Sunday during a special ceremony at the Hamtramck Public Library. Despite several inches of newly-fallen snow, about 50 people attended the event.

Mayor Majewski spoke briefly on the new term ahead and where the city had come from in the last term. She noted that four years ago when she was sworn into office for her second term Hamtramck was in a financial crisis and eventually came under the control of an emergency manager.

The EM is scheduled to leave at the end of June.

Today’s Hamtramck, Majewski said, is “gathering a positive momentum” thanks to an improving economy and Detroit being on an upswing.

To the freshman city councilmembers, Majewski said they can expect to be “transformed” by the experience that is about to unfold.