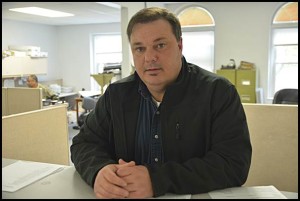 Mark Ragsdale, Director of Public Works, was been on the job for only a few weeks and was immediately faced with a problem over city water bills. He explained how the bills got off track.

By Charles Sercombe
Lately there has been a lot of discussion about the city’s water bills.
For a recent two-month stretch the city fell behind in sending out monthly water bills. When the city finally did get bills out, some homeowners were outraged over how much they were being charged.
To make matters more confusing, in order to catch up, the city sent another round of bills out during the same month. Some thought they were being double-billed.
And then to add even more misery, some of the bills were miscalculated, using a wrong formula, and were much higher than they should have been.
Recently, we introduced newly-hired Director of Public Works, Mark Ragsdale, who took the opportunity to address the issue.
Here’s Ragsdale explaining the water billing situation in his own words:

Ragsdale: “Until I was hired a month ago the department had run for months without a fulltime Director or Water Supervisor. Earlier this year, Rodney Johnson was hired on a part-time basis to fullfill a state mandated requirement by the DEQ for an S-1 water distribution license. He handled all requirements and compliances by the state.
“In April of this year the Water billing cycle was changed from quarterly to monthly. The reason for this was too many renters were running the water bills up thousands of dollars then leaving.

“The money would then get transferred to the tax roll. Many times the tax bill would not be paid and homes would go into foreclosure. This would result in the City losing thousands of dollars in revenue. Billing monthly allows the City to keep a better eye on the amount owed.
“Over the summer the Director and the Water Supervisor left the department, leaving Rodney as the interim director. The Water Supervisor was the only one that knew the water billing system, so this job was left for Rodney to do. During this period some residents did not receive water bills for three months.

“This explains why some people are getting water bills two weeks apart. They are catching up on the ones that weren’t paid. Many residents are looking at the bill date and not the billing period that they are being billed for. Rodney was unfamiliar with the software program, so through the learning process there were some errors made, some human, some by the default settings on the computer, and some with the radio equipment.
“For example, some people had $12,000 water bills that should have been $120; this was due to a multiplier on the default setting that was set at 1 which should have been .01. To correct these issues we had the manufacturer of the software come in and train all employees in the office. The accounts that needed adjusting have been adjusted and we are moving forward.
“Since then Rodney has gone from a part-time employee to a contractual employee. This will explain the many complaints that he is never there; on the contrary, Rodney works late hours and weekends. I am very thankful for the work he has put into getting this situation figured out.

“I understand the frustration of the residents, but the way the employees have been treated during this time is ridiculous. We have had people come to the counter screaming and yelling and calling the ladies liars and crooks — using profanity.
“This kind of behavior will not be tolerated. The ladies at the counter treat residents with respect and professionalism, and I expect the same from the residents.

“The word got out that some of the water bills are messed up and automatically some people think their bill is screwed up because they have a high bill. The department has the technology to track daily water usage, in some cases, down to the hour.
“This lets us know if the water is being used or not. This technology can be used to diagnose leaks. If a resident has an issue with the bill, our office will be glad to check it out for them. We will help educate the resident on how to read there bill, what the normal usage should be, and water conservation tips. If need be, we will go out to the residents home, as a courtesy, to check for leaks.”
(Editor’s note: Freelance writer Mike Murphy contributed to this report.)