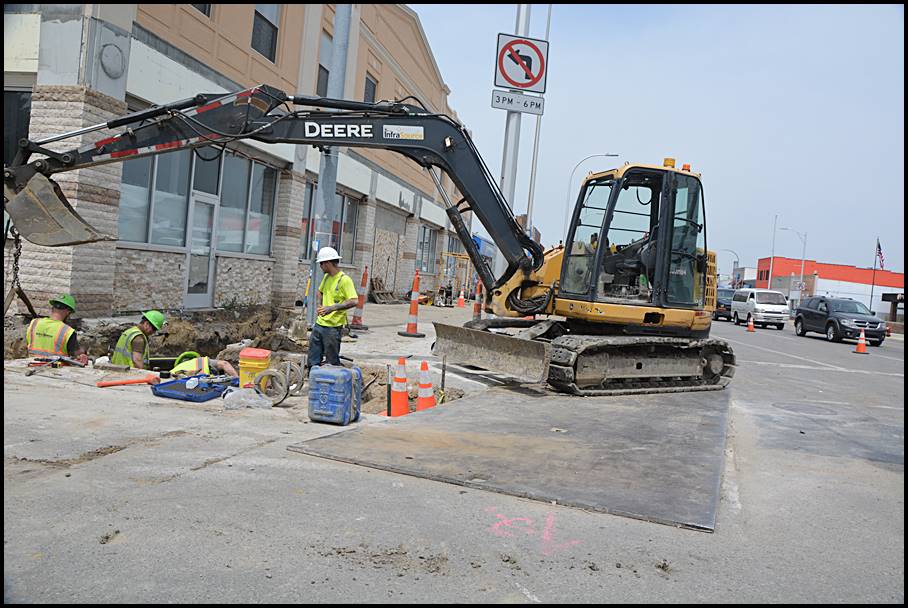 By Charles Sercombe
Getting around Hamtramck has been a challenge this spring.
Since last year, DTE Energy has been digging up city streets to install new gas lines.
In a number of instances, it has meant tying up major intersections, much to the annoyance of drivers and pedestrians.
Have patience, folks.
The work is expected to be completed by late November.
The city is one of 10 communities getting a full upgrade. Eventually, cities throughout the entire state will receive the same treatment, at a total cost of $3.5 billion to DTE.
In Hamtramck alone, the cost amounts to $15 million, which translates into 14-16 miles worth of new lines.
The old lines have been there for about 40 years, and as one DTE crew member told The Review, this has resulted in frequent breakdowns and interruptions to service.
This is what DTE had to say about the lines on its website: “The yellow, flexible plastic (polyethylene) pipes are corrosion resistant, easier to transport, less costly to install than steel or cast-iron pipes.
“The pipe walls are thicker than those they replace and are more resistant to cracks and pressure, reducing the potential for leaks.
“Smaller versions of the plastic pipes are being put in place to replace steel/copper service lines that bring the gas from the gas main to the customer’s home or business.”
On top of all that, 3,000 “smart” meters are replacing the old ones, which in some cases are located inside residences.
The new meters will all be installed outside, so that DTE can get remote readings – meaning meter readers will no longer be visiting houses, or that, in other cases, you won’t have to call in your monthly readings.
All of this is free to customers.
But there is a catch about the placement of the new outdoor meters. DTE will install them where the gas line runs.
In some cases, that might prove to be inconvenient to homeowners.
Take Waldemar Szewczuk, who owns a couple of rental properties.
One of the meters placed by DTE was on the side of a house where a path runs to the entrance for the rental dwelling. The new meter makes it a tight fit to get around, he said.
To move it can cost upwards of hundreds of dollars.
DTE did send out notices to homeowners about the new meters being installed, and gave homeowners a chance to either reject the meters or to request where they would like to install the new one.
In both cases, there is an additional charge.
A meter that has to be read by DTE or the homeowner has a special monthly fee. Relocating the “smart” meter also has a charge, depending on how far away it will be from the gas line.
To request a special placement of a meter, call the Hamtramck field supervisor at (313) 270-9240.
June 21, 2019