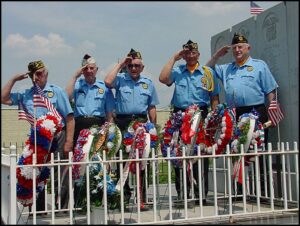 A special memorial celebration will be held this Monday at the gravesite of Col. Francis Hamtramck in Veterans Park. New historical markers will be installed. The event is part of ongoing events being held this year in celebration of the city’s centennial anniversary. File photo

By Greg Kowalski
The gravesite of Col. John Francis Hamtramck will get some new additions on Memorial Day, Monday, May 30.
Three new historical markers will be added to the gravesite at Veterans Memorial Park on Jos. Campau. The Sons of the American Revolution will install a small staff-like marker that is similar to one that had been at the earlier grave of Col. Hamtramck at Mt. Elliott Cemetery in Detroit more than 100 years ago.
The Daughters of the American Revolution will attach a small plaque honoring the colonel at the foot of the grave, and the Sons of the Revolution will install a small medallion marker at the gravesite. All three organizations have a long history of honoring veterans of the various wars the United States has been involved in.
The groups will have representatives at the formal dedication of the markers, to be held at 1 p.m. at the park. The event will include guest speakers, and a ceremonial cannon will be fired. Representatives of local veteran groups also will be present.
The Hamtramck Historical Museum, which is sponsoring the event along with the groups, will be open throughout the day. The public is invited to attend the event, and to visit the museum at 9525 Jos. Campau.
The event will also mark the 100th anniversary of the incorporation of Hamtramck as a city back in 1922.
The city is named after Col. Hamtramck, who was born Jean Francois Hamtramck in Montreal, Canada. He came to the new United States to fight in the Revolutionary War. He changed his name to John Francis, and continued to serve with the American Army after the revolution.
In 1796, President George Washington sent Gen. Anthony Wayne and Col. Hamtramck to Detroit to force out the British, who had refused to leave after the Revolution.
They were quickly successful, and when the first Hamtramck Township was formed in 1798, it was named in Hamtramck’s honor. He died in 1803, and was buried in Detroit before his body was moved to Hamtramck in 1962.
For information, email the Hamtramck Historical Museum at hamtramckhistory@gmail com, or call (313) 690-9390.
Posted May 27, 2022