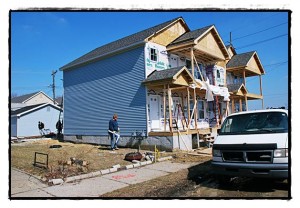 A new round of housing construction is about to get underway.

This will be the second of three phases to finalize an agreement from a housing discrimination lawsuit filed over 30 years ago.

The upshot of the agreement is the city must provide 200 housing units for those who filed the lawsuit. Although it is agreed that the housing deal took far too long to come to, and that it is tantamount of “justice delayed is justice denied,” city officials say new housing is a welcomed addition any time.

In these final three phases of the agreement, new rental dwellings have been built and now a combination of 39 new houses and rehabs will start up.

Wayne County is also pitching in for the final leg of the project by building four new housing units and rehabbing 26 existing housing units.

While the new housing couldn’t come at a worse time period, considering there has been a collapse in the housing market along with a wave of foreclosures, the houses are indeed selling, said Hamtramck director of Economic & Community Development, Jason Friedmann, thanks to financial assistance being offered for those who qualify.