New law is something to cluck about 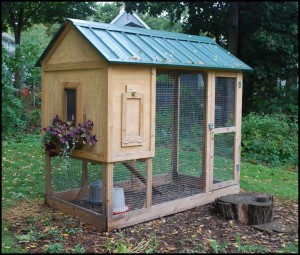 Hamtramck residents can now own up to six chickens, as long they are kept in a coop.

By Charles Sercombe
Enjoy fresh eggs for breakfast?
If so, you won’t have to drive or walk to the store for them. On Tuesday, the City Council passed an updated ordinance regulating animal ownership, which will now allow residents to keep no more than 6 chickens or rabbits.
While it gave residents something to cluck over, Hamtramck has joined a growing number of communities that are allowing live chickens (hens only) to be kept – as long as they are in coops.
The arguments for and against ran along the lines that the city can’t enforce its current animal codes, to those who say it’s healthier to produce their own food.
Mickey Pokoj represented the “con” side of the issue.
“People already don’t clean up after their animals,” he said.
Mohammed Islam agreed, saying: “We’ll have a sanitation problem, and it will attract flies and rats.”
Hillary Cherry represented the “pro” side of the debate, saying that there is an increasing “disconnect” between people and where their food comes from.
Originally the new ordinance banned the sale or trade of chickens, and presumably their eggs, but the council struck that down. Again, there is a growing movement of urban farmers who sell their produce, including locally-produced eggs.
The council also agreed to allow residents to own pigeons, as long as they are kept in a coop.
Mayor Karen Majewski was a leading proponent of allowing pigeons, saying it’s a “centuries-old tradition” to race them.
Hamtramck once allowed the ownership of pigeons, and some houses still have wooden pigeon coops in the backyard.
What the council would not allow is for households to have up to four dogs and four cats.
Councilmember Robert Zwolak said that Hamtramck housing units are too small for that number of dogs and cats.
“Dogs are high maintenance,” he said.
The law goes into effect 10 days after its publication in this week’s Review. City Clerk August Gitschlag said he is working on getting permit forms for the chicken and pigeon coops.
In other updates of the animal ordinance, dog owners are limited to how long they can keep their pets outside on a leash, and that the leash used has be appropriate to the size of the dog.
There have been instances where dog owners have kept their dogs leashed with heavy chains and let them remain outside for hours on end.

3 Responses to New law is something to cluck about