New Orleans can have Mardi Gras, we’ve got paczki 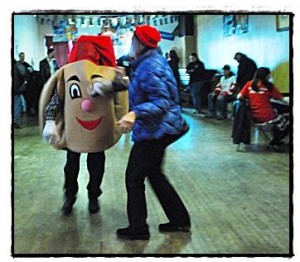 (Editor’s note: Our “cub” reporter, Alan Madeleine, has a degree in English and also has a master’s degree in something. He owns not only a dictionary, but also a thesaurus. In his spare time you can find him on stage at Planet Ant.)

By Alan Madeleine
The assignment, a seemingly simple one: experience Hamtramck’s version of Mardi Gras for the first time. The sort of assignment one can’t help but love, one that promises both the smiles of ladies and the stench of excess.
Out into the soupy streets, with breath steaming, I go — in search of the zeitgeist of Hamtown’s Paczki Day. Truly, a newcomer in the land of the perennials.
And it is immediately true — the city exudes a different vibe today. Wonderlandlike, one might think.
Odd sights abound: The city streets seem less menacing, less gritty. Laughter mingles with the scent of fried lard. Children are noticeably few. Lines weave out of each bakery’s entrance.
A single tennis shoe sits alone at one corner, still tied, its owner mysteriously moved on — but to where? The Muslim call to prayer blaring out seems more of a cry for help, a cruel culture clash in the face of so much beery goofiness. Polka beats boom from several of the bars, and the people rock to and fro. And while this town has become more global than ever lately, the day seems infused with an oom-pah-pah Polishness that cannot be denied.
And I find myself grinning along, grinning to the sounds of Toledo’s Polka Floyd as they play selections from “Dark Side of the Moon” in trademark three-quarter tempos. Grinning also at the people emerging victorious from a bakery, boxes piled high and tied with string, their gelatinous contents wobbling provocatively. And grinning for sure at the diminutive chap dressed as a human paczek (that’s the singular of paczki).
The moustache of one woman rivals Lech Walesa’s. New Orleans has nothing on this, I think. Nothing — except nudity, which our twenty-something temperature discourages in abundance. Still, cop cars swerve leerily, as if searching for the right opportunity to play Stash Musial on some jerk’s melon. Mercifully, no one relieves himself on the sidewalk.
Yet.
Still, it is only 3:30 in the afternoon. And if Joseph Campau isn’t quite Bourbon Street, it isn’t for lack of desire. One bar hawks free paczki with any purchase of a drink, say for example a Blatz beer. The mere thought of this combination brings tears to my eyes, and not in a good way. I overhear someone — I’ll go ahead and assume they were from the suburbs — pronounce it “Joseph Caaam-po.” My tears redouble.
I briefly wonder what Starvin’ Marvins offers on Fat Tuesday. Then I’m immediately sorry I wondered. Not to worry — they’re outside the city limits. Not even Catholic, I still feel I should give something up for Lent after this dough-fueled orgy. Instead I order carry-out pizza. This story isn’t about me, I keep reminding myself: it’s bigger.
If I keep eating paczki and pizza, however, the story won’t be bigger for long.
I find I can’t erase from my mind the image of Mr. Paczki rambling like a disengaged parade float down Yemans, while drunks suggest things in which he might want to dunk himself. I ponder next what sort of nightmares a jelly doughnut binge might bring. I see misshapen, swollen faces appearing at every corner from out of Hamtramck’s winter murk. They appear molded from lard themselves. I imagine I’ll soon be one of them, if I’m not already (Editor’s note: Yeah, he’s getting there).
And then suddenly I’m back at the office. Safe. In one piece. No bites taken out. And I shake my head. New Orleans may have the big parade, the floats, the scantily dressed folks, the Creole cuisine. But we have paczki. And more paczki. Frankly, I think for one day, we could probably feed the world. The thought gives me a warm feeling. No, wait! Did that last street person just do what I feared …?! No. He did not.
But on this, Hamtramck’s strangest day — who could blame him if he had? Not I.
No, not I.