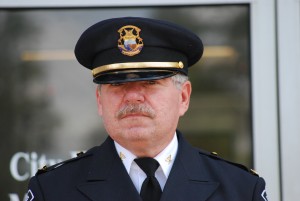 Growing up on Edwin Street in Hamtramck, Marek (Mark) Kalinowski used to look up to and admire the police officers of Hamtramck.

Now after two decades of service with the Hamtramck department he has been appointed chief of police.

Born in Tczew, Poland, in 1960, Kalinowski’s family immigrated to Hamtramck in 1962. He attended St. Florian Elementary and High School, graduating in 1978. From there Kalinowski joined the Marines, serving nine years in San Diego, the last two as a Drill Sergeant. It was during this time that Kalinowski gained U.S. citizenship (in 1985) and the mentality that would guide him throughout his professional career.

“As a Marine, I learned to love the uniform and the discipline required to wear it,” he says. “It gave me a sense of pride and accomplishment.”

He isn’t just talking about the United States Military’s Code of Conduct, either. He means it in the most literal sense. It’s why he still wears a uniform to work every day.

“It’s important to look professional to the public,” he says. “It’s the first thing anyone notices about a police officer. If I show my department that I’m regularly in a crisp and clean uniform, it motivates them to do the same. And in turn, we can better represent the city.”

All of this is part of his new approach to policing the city. Sworn in June 15, Kalinowski has been taking steps to foster a better relationship between the public and the police. It’s not that the current situation is tense. But it could be better.

“Interaction between the community and police is paramount to creating a safer overall environment. It helps create a sense of familiarity with the area you are patrolling and raises police visibility,” he says.

Community interaction is something Kalinowski is very familiar with. As a patrolman he used to get out of his car and occasionally shoot basketballs with kids in the park. From 1995 to 2000 he served as the D.A.R.E. Officer in the schools. And though he worked midnights for the last six years as a Lieutenant, now that he is Chief he plans on making his presence known.

“I’m not afraid to go out in town, to meet people, make speeches and eat out,” he says. “It’s one of the most rewarding and enjoyable parts of the job, getting to know the people you are protecting.”

The changes can already be seen. On Jos. Campau, the foot patrol has been amped-up and police presence can be felt.

“The squad car is a tool, not an office,” says Kalinowski. “If we spend more time in non-confrontational situations talking to the people, and going the extra mile to help out when they need it, they in turn will feel safer and will be more willing to work with us rather than against us. And the real winner there is the community.”

“There is a different, more positive attitude around town with police officers and citizens,” he says, adding that he plans on working with the city to create new ways to solve old problems. “And I’ve already spoken to the mayor about some solutions to the crimes we are facing, and for the most part we agree on enforcement.”

As for crime, it is something that will always exist. But Kalinowski is optimistic for the future.

“You can’t have a place without crime, but if you have a place without the opportunity to create crime, it can greatly reduce the threat of it. And today, our officers are better-educated, better-trained, and really want to make a difference. The changes I want to implement will only be as effective as the officers enforcing them. And fortunately, Hamtramck has a great squad. So look for some positive changes to come soon, courtesy of from the Hamtramck Police Department.”