New season for Detroit City FC kicks off with a loss 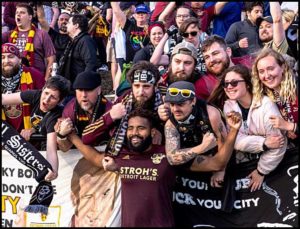 The Detroit City Football Club kicked off its new season on Sunday to a packed Keyworth Stadium. Photos by Konrad Maziarz

By Konrad Maziarz
The Review Special Writer
Detroit City Football Club’s (DCFC) home opener on Sunday drew 5,254 soccer fans who braved the wild, stormy weather.
They packed Keyworth Stadium to watch the hometown team face off against Kalamazoo Football Club.
DCFC, affectionately nicknamed “Le Rouge,” opened the scoring with a Shawn Claud Lawson goal in the 40th minute, and took a 1-0 lead into halftime. Kalamazoo tied the game in the 58th minute after converting a penalty kick, and less than five minutes later DCFC retook the lead thanks to a goal from Max Todd.
This is where we’d love to say DCFC held on to the lead, but Kalamazoo scored another two goals, with the eventual game winner in stoppage time. 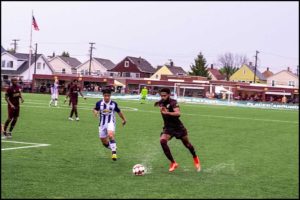 The final score was DCFC 2 – Kalamazoo FC 3. DCFC’s next match is today (Friday, May 24) against rivals Ann Arbor Football Club at Keyworth, with kickoff at 7:30 p.m. Tickets are $12, and are available at the gate, online or at Wheelhouse Detroit, located at 9401 Jos Campau.
A highlight of the game was Keyworth’s new turf, which was purchased through a grant from the Ralph C. Wilson, Jr. Foundation and in cooperation with Detroit City FC, the City of Hamtramck, and the Hamtramck Public Schools.
In previous seasons, with the torrential downpour, a game most likely would have been rescheduled. But because of the new turf, the teams were able to take the field.
That’s not the only thing new this season. The team will step up from being semi-pro to join a new professional soccer league later this season, starting in August.