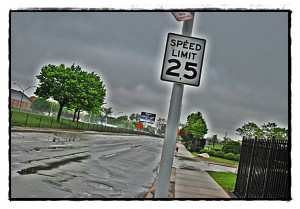 It appears that Public Act 85 of 2006 doesn’t necessarily require municipalities to conduct traffic studies to determine if speed limits are set at their proper levels. But that doesn’t mean it doesn’t, either.

That’s according to Lt. Gary Megge, head of the Michigan State Police Traffic Services Section. In a recent phone interview, he was able to offer some of his insight and expertise into the law that is fast becoming a favorite for motorists looking to defend themselves from speeding tickets they deem unreasonable.

Lt. Megge told The Review that while Public Act 85 does not have any specific parameters that actively require cities to conduct studies to set speed limits, the new law has established two ways to determine what the speed limit should be.

The first method utilizes traffic and engineering studies to analyze roadways in order to take into consideration the amount of drivers and the average speed of their vehicles. After this analysis is completed – during clear driving conditions and not during peak travel periods like rush hour – a speed limit, based on what 85 percent of the vehicles were moving during the study, can be established.

The second method of setting a speed limit has to do with the amount of access points on a given road. By taking into consideration the number of driveways, parking lots and side streets that border a road, a speed limit can be determined through guidelines set by the state.

So what makes a municipality responsible for conducting a traffic study?

Lt. Megge says the answer lies in the enforcement of the law. According to him, when a ticket is issued by a police officer, the officer must list the law that corresponds to the violation. And because some tickets are issued for speed limit violations on roads that have not been studied, that is where the legal transgression occurs.

“There is nothing in the code that specifically requires a municipality to conduct traffic studies,” said Megge, “but enforcement of any law must match the criteria of the law.”

Many of the speeding tickets that are issued are not in compliance with the law simply because they reference a section of the law that is no longer relevant. Megge explained that prior to the passage of Public Act 85, speed limits were set by using the “residence district” designation which automatically set speed limits to 25 mph in residential areas. But with the passage of Public Act 85 in 2006, those limits were no longer valid.

One such area where the speed limit is no longer valid is the northbound 1-75 service drive between Holbrook and Yemans. After reviewing a map of the area, Megge concluded that tickets issued on that particular stretch would not hold up if challenged in court.

“There is no way that is a legally enforceable 25 mph speed limit,” he said.

Fortunately for drivers, there may be some help on the way. On Wednesday (May 12), State Rep. Rick Jones, along with State Rep. Bettie Cook Scott, introduced two new bills to the legislation that would mandate municipalities to comply with Public Act 85. Jones, in a phone interview with The Review, said that as a former sheriff in Eaton County, he thought it was deplorable that unwarranted tickets are being issued to drivers throughout the state.

“When I heard that this outrageous situation was going on in so many cities throughout Michigan, I was very angry that these cities and their attorneys have decided that ‘four years ago this law was written in a gray area so we don’t have to comply’,” he said. “We want to fix it so it’s not in a gray area and it’s very clear that every city shall comply with the law.”

As for why Hamtramck has not yet complied with the law, City Manager Bill Cooper explained that, for the most part, when a new law is passed it trickles down to the local level through a variety of sources that include organizations and other agencies that the law pertains to. However, he said that because there is no formal organization that reports new laws to local municipalities, sometimes – as was the case with Public Act 85 – laws that get passed by the state go unannounced to the local level.

Cooper also said that occasionally the state passes unfunded mandates that require a city’s action without specifying how to pay for them. In those instances, he said that the city tries to comply with the law as much as possible, but without the necessary funding sometimes it is unable to do so.

“This is a perfect example of an unfunded mandate,” he said.