New state office opens with fanfare and hope for economy 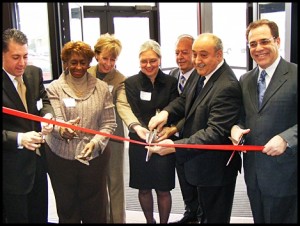 By Ian Perrotta
Review Staffwriter
Tuesday (Feb. 2) may have been Groundhog Day, but in Hamtramck nothing overshadowed the grand opening of the new Department of Human Services Building.
The 30,000-square-foot building will house about 200 state employees and provide a range of services. It was formally dedicated with a mid-morning ribbon cutting ceremony that capped 14 months of construction. The site housed the former Woody Pontiac dealership, which was demolished in 2008.
“These bricks and mortar were not built just by great contractors,” said Ron Boji, president of the Boji group, which built the office, “but by a great team.”
That team included everyone from the citizens of Hamtramck to local and state government officials, as well as a host of other interest groups who rallied behind the project. Boji specifically thanked Mayor Karen Majewski, City Manager Bill Cooper, former Councilmember Scott Klein and City Attorney Jim Allen for being instrumental in getting the project off the ground.
Aided by a Cities of Promise grant through the Michigan State Housing Development Authority as well as a Michigan Business Tax credit, the Boji Group was able to turn the formerly blighted sight into an energy-efficient building that will help empower people through its wide variety of services. The building not only cost the State of Michigan less than market rate, but it is expected to help bolster the city’s economy as well.
“The northside has taken its hits, but we hope with this new building we can help change that,” said Boji.
It was a sentiment echoed by Wayne County Executive Robert Ficano, who said the building was the type of project that shows that the state, businesses and the economy can move forward. State Representative Bert Johnson agreed, saying that it was a “magical day” in Hamtramck.
“All the ugliness that is our economy and other issues, they wane just a bit,” he said. “This is testament to the rejuvenation, imagination and invite of Hamtramck.”
The compound that houses the building and its parking lot is collectively known as Woody Plaza. The name was chosen not only because Woodrow W. Woody’s dealership formerly occupied the site, but also because of Mr. Woody’s philanthropic nature as well. Known for handing out crisp $1 bills to children, Woody’s generosity was not forgotten at Tuesday’s ceremony.
“I wouldn’t be a historian if I didn’t express satisfaction for naming the building after Woodrow Woody,” said Mayor Majewski. “It’s a concrete reminder that we move forward only by recognizing our past.”