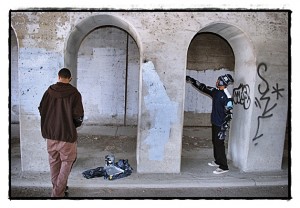 They’ve only been on the job for a few weeks, but the Weed and Seed program’s new Youth Coaches have already began to make a difference.

Last Saturday (Nov. 6), Antonio Allen and Khris Booth – who both began working for Weed and Seed last month – hosted the first of what will likely be many youth-oriented clean-ups. The duo was at the southend of town to combat graffiti that has plagued the Jos. Campau viaduct.

Though the clean-up group was relatively small, they were still able to have a big impact. In addition to covering the graffiti that plastered the walls and columns of the viaduct, they also used a special cleaning solution – both ironically and appropriately called “Goof Off” – to clean graffiti off of the area’s street signs.

“It was a good start to the upcoming year,” said Allen. “We want to not only get kids involved, but have them be excited about it. We hope to get a lot accomplished next year.”

Curious about who the new youth coaches are? In the following weeks The Review will profile both Antonio Allen and Khris Booth.