New Year starts off with inauguration of new officials 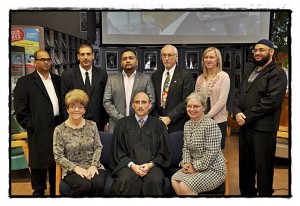 Newly elected officials took the oath of office on Sunday, Jan. 1, at the Hamtramck Public Library.

The presidential primary may just be starting, but Hamtramck’s election from last November has finally come to a close.

On Sunday (Jan. 1) the city’s three elected council members and two new school board members were officially sworn into office by 31st District Court Judge Paul Paruk. The event was held at the Hamtramck Public Library.

Paruk opened the ceremony by thanking those in attendance for taking the time to commemorate the occasion, then handed the microphone to Rev. Sharon Buttry of Acts 29, who led those attending in a prayer.

Mayor Karen Majewski then took to the lectern and spoke briefly about the importance of staying active and involved in the city. Thanking the winners for the effort they had already put forth, she also noted the personal sacrifice it takes to be a successful councilperson or school boardmember, framing the task ahead.

“Public service is the willingness to build something lasting for the public good rather than for personal gain,” she said.

Then it was on to the main event as Paruk introduced first the school board election winners and then the council. Councilmembers were invited to say a few words after taking the oath of office.

Magdelena Srodek, who emigrated from Poland in 1987, was the top vote-getter in the school board election. A product of Hamtramck’s public schools, Srodek will continue the tradition when her own daughter begins schooling in the next few years. In the meantime, you can find her working at her family’s store, Srodek’s Campau Quality Sausage.

Nassir Hussein, who immigrated to the United States from Yemen to Brooklyn in 1993, may have moved to Hamtramck only about five years ago, but he has already made an impact. A member of the Common Word Alliance and the owner of a print shop in Dearborn, Hussein also has five children, some already in the Hamtramck Public Schools system.

Cathie Gordon, the council’s lone incumbent to seek re-election, was first elected four years ago. A longtime Hamtramck resident and a St. Florian High School graduate, in addition to being a Registered Nurse Gordon is also a mother, grandmother, caregiver, political activist and owner of the New Dodge Lounge.

“Standing in the shadows of the great leaders of Hamtramck’s past,” said Gordon, “I am here not as a city official but as your servant.”

Bob Zwolak, a lifelong resident who was technically re-elected – just with a few years between terms – has held numerous positions in Hamtramck government, including City Clerk and a position on the Chamber of Commerce, among others.

“We’re all part of a great big Hamtramck fraternity, and it continues to grow,” said Zwolak. “We need to promote and sell the city of Hamtramck.”

Anam Miah, who has lived in Hamtramck for the last 23 years and is the proud parent of two children – with one on the way – sat on the Zoning Board of Appeals before becoming the president of his local steel union. In addition to wearing brilliantly white shirts (ask Zwolak about that), Miah is also committed to loyalty, fairness and trust.

“This has been a long time coming,” he said. “The city has had lots of ups and downs, and I’m glad to be here to help make some changes and be involved in the community.”

For those of you who can’t wait to see the newly-elected officials in action, the first regular council meeting is Tuesday (Jan. 10) at 7 p.m. and the first school board meeting is the next day (Jan. 11) at 6 p.m.