No ‘pawn star’ here, but pawn shops gain in popularity 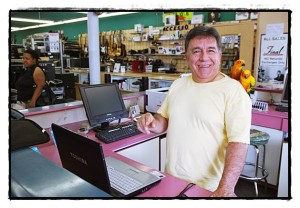 These days, who isn’t?

Maybe you have some items of value around the house that you could sell to make ends meet?

This is where pawn shops often come into play, and Hamtramck is not without its share. In this slumping economy, being a pawn broker can be a lucrative endeavor.

Some of Hamtramck’s pawn businesses say that business is currently solid.

For example, #1 Pawn Shop on Jos. Campau near Holbrook is filled with items such as musical instruments, electronic products, jewelry, vintage bikes, cameras, you name it.

Sam Barbat is the owner and he’s been a Hamtramck businessman since 1980. His store was once solely a video rental outlet, but with the Internet now in just about every household, movie rentals are a thing of the past.

So, he was forced to reinvent himself. The pawn business seemed like the logical next step.

“It’s an exciting business, you never know what’s going to come in,” Barbat said in reference to the stream of sometimes odd and unique goods that folks bring in to sell.

Although some frown on the pawn business in general, Barbat said he’s doing the community a service by providing an outlet for people to get a few bucks to tide them over when times get tight.

“If you have nothing but a ring from your grandfather, at least you can get some money,” Barbat said. “No bank is going to help you out.”

The shop’s manager, who declined to give his name, said most of the store’s buyers come from outside of Hamtramck, with sales being nearly as good as they were before the recession hit.

The manager, however, denies the store serves as a pawn shop. He calls it a jewelry store, with more than 90 percent of the business being sales.

It’s possible this denial of Ice Diamond of being a pawn shop could come from the negativity that has been tagged onto the industry.

For example, The Commercial Appeal, a newspaper in Memphis, Tennessee, recently ran an editorial piece about the city council’s zoning denial for a new pawn broker.

The article read: “One sign that an area is perceived as declining is the sudden proliferation of pawnshops and payday loan businesses along a neighborhood’s major thoroughfare.”

However, despite this perception, the pawn industry appears to be doing well, with pawn brokers serving as productive and accepted members of the local business community. The pawn business has also received a huge boost in its image with the popularity of the cable TV show, “Pawn Stars.”

Jason Friedmann, Director of Community & Economic Development for the City of Hamtramck, said it’s good to have a mix of businesses available to residents, including pawn shops.

“They certainly have their place,” he said.

Friedmann said these shops serve as resale stores, which is useful to many people.

“You need to have a proper mix,” he said. “Two or three (pawn shops) can be a good part of the economy.”