No change for snow plowing 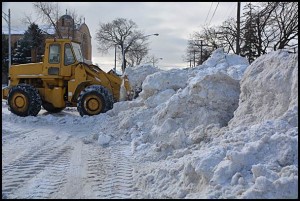 Emergency Manager Cathy Square has given up on looking for a new contractor for snow plowing service. Platinum Landscaping will once again provide that service.

By Charles Sercombe
The search is off for a new contractor to perform snow plowing service and lot maintenance.
Emergency Manager Cathy Square said this week that “it’s too late in the season” to look for a contractor to take over snow plowing and street salting.
Last year Platinum Landscaping, Inc. charged the city about $800,000 to plow and salt about 12 major streets.
Platinum also took care of lot maintenance and pothole repairs, and over the past few years the company has earned over $2 million.
The company’s contract, which had no expiration date, came under review when the former Director of Public Works, Steve Shaya, revealed he was the uncle of the owner of Platinum.
Square fired Shaya shortly after that admission.
Square twice sought bids for the services performed by Platinum this year, once last March and after rejecting those bids again in July.
Square said it was not only too late in the season to get a contractor to sign on for snow plowing serviced, but also that Platinum was still the lowest bidder.
John Baker, the owner of Metro Detroit Landscaping and Snow Removal, disagreed with Square over whether it was too late to hire a company for snow service.
“It’s not late at all,” he said. “It’s not late even when it’s snowing.”

One Response to No change for snow plowing