No matter how you say it, paczki is known the world over 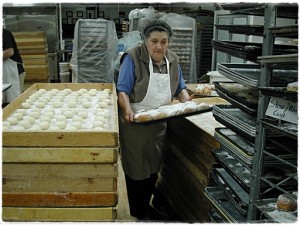 By Alan Madeleine
Review Staffwriter
Behold the mighty paczki.
They ain’t just doughnuts, people.
As most old-guard Hamtramckans know, Fat Tuesday in these parts equals Paczki Day. The day before the Catholic holy day of Ash Wednesday — alternately known as Mardi Gras (literally, “Tuesday Fat”) in New Orleans — is one of the best days of the year for those who like to indulge their sweet (and fat) tooths.
And yes, per the Oxford American Dictionary, it is “sweet tooths” (think, “low lifes”). But this is the high life we’re talking about — specifically, the doughnut high life: the king of the cruellers, first among fried cakes.
Not for the calorie counters among us — the delightful gutbombs clock in at about 420 calories apiece — the paczki is revered the world over, if by some awkward names. Think you might like a Krapfen? How about a nice Fank? Or maybe some “Bolas de Fraile” (“Monk’s Balls”) would be more to your liking? Because in Germany, Hungary or Argentina, respectively, that’s paczki you’d be talking about.
The doughy wads did once have a higher purpose than merely adding to Valentine’s Day love handles, however. They were first concocted to use up items such as eggs, lard and sugar so they didn’t spoil during the Lenten do-without. Nowadays, they still symbolize indulgence to many. And they’re still as popular as ever.
Sandy Petrovski-Bakic, who runs the New Martha Washington Bakery along with her father, notes that they are even willing to ship their wares, with the proper notice. Such is the love people feel for the traditionally made, Old-World recipes, that they’re willing to pay to have them sent, in some cases a very long way indeed. And yet, Petrovski-Bakic says, they’re still fresh when they do arrive.
Not quite a harbinger of spring, perhaps, but maybe about the next best thing.