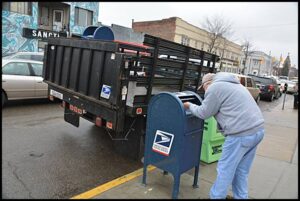 A new mailbox was installed this week in front of the Hamtramck Post Office. The older ones were damaged in a car accident and removed.

By Charles Sercombe
For a moment this past week, some on social media were freaking out about the Hamtramck Post Office branch.
It started when mailboxes were removed, an act which some thought was done under mysterious circumstances.
Turns out it wasn’t much of a mystery.
A driver crashed into them. One box was replaced on Tuesday and another, a drive-up box (called a “snorkel”), will soon be installed.
But concern didn’t stop there.
The sudden removal of the boxes prompted some folks to spread unfounded rumors that it meant the branch office was being closed.
Not true at all.
The Review contacted the Detroit Postmaster General’s Office, and we received this email:
“There is no truth to the rumor the Hamtramck Post Office is closing,” said Elizabeth Najduch, a spokesperson for the office.
But there is still a problem, Mayor Karen Majewski said in her weekly Facebook address to the community on Monday.
The spread of COVID has hit postal employees, as well as over 20 millions of other Americans, making staffing at the Caniff Ave. branch iffy.
The office has closed suddenly on multiple occasions during normal business hours, simply because the postal service can’t get employees to staff the office.
This has actually affected postal operations across the nation, and has also caused delays in delivering the mail.
The issue also reminded some of a threat to close the branch office back in 2005.
A resident-led group lobbied the postal service then, and the office was spared.