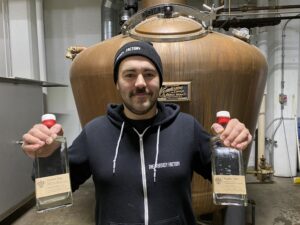 Once again, Paczki Day won’t be the same this year with everyone semi-quarantining at home and bars and restaurants being limited to how many people can be served. But, for the second year in a row, the folks at Detroit City Distillery have livened things up with a paczki-flavored vodka.

By Alan Madlane
It’s no secret that the alcohol market has blown up in the past 20 or more years.
It started with a lot of small, or “micro-,” breweries popping up all over the country, often featured in bars that served their products right on site. A number of these grew in popularity, to the point where they began to show up in force on shelves at Kroger or Meijer, pushing aside some of the old stalwarts – think Budweiser, Miller and Coors.
That was soon enough followed by a trend of likewise-small distilleries for hard spirits. The variety of these vodkas, bourbons, ryes, tequilas, rums, and other such available nowadays is truly astounding, and there is something there for literally every taste.
Even a number of celebrities have jumped into the game, to varying levels.
We at The Hamtramck Review wouldn’t ordinarily concern ourselves with a Detroit-based distillery centered down near Eastern Market, at least not on working hours (insert chuckle), but Detroit City Distillery has sort of forced our hand, if you will.
You see, they’ve concocted a product too on-the-nose to ignore here in Hamtown.
It’s a paczki-flavored vodka. And yes, you read that correctly. The timing coincides with Paczki Day, coming up this year on Feb. 16.
To get to the bottom of this bottle, er, mystery, we followed a trail left for us by Elizabeth Weigandt, who runs her own communications company, and who got us in touch with the head distiller for the company, Steve Orzechowski. Some of our questions ended up answered instead, or as well, by one of the distillery’s eight co-owners, Michael Forsyth.
Here follows the text of that written interview.

The Review: I watched the short video on your website, where it mentions that Detroit City Distillery was founded by eight friends, who have all known one another since the age of three?
That’s a pretty incredible friendship legacy for two people to maintain, let alone eight people. Can you tell us a little about who you are, and how you all know each other?

Steve Orzechowski: I’m Steve, the head distiller at Detroit City Distillery. I’ve been at the company for five years now. I started as a bar back, and climbed my way up the ladder to running the still every day. Every spirit we make, I have a hand in. It’s an awesome job.

Michael Forsyth: All the owners grew up together in the little town of Bath, Michigan. Most of us have known each other since we were three years old.
When we were 16 years old, we dreamed of opening a brewery.
One of our founders, J.P. Jerome, was inspired, and went to school to learn how to make beer. He got a Ph.D. in microbiology, and then went to work at Bell’s Brewery.
Later, at a bachelor party, we decided to open a distillery. It felt like the beer world was crowded, so we decided to do spirits. We got drunk all weekend, and it seemed like a good idea. The distillery happened.
The wedding never did.

The Review: Why distilling, and why in Detroit as opposed to, say, in the suburbs? Is it easier to get your Michigan farm-fresh ingredients at Eastern Market because of its nature as a food shipment hub?

Michael: There is no other place in the world we’d rather be than Detroit and Eastern Market. We’re Detroit CITY Distillery, and proud of it.
It comes with great a responsibility, for the [city’s name] to be part of our brand. Detroit set the standard for American craftmanship, and we try to honor that legacy, by making things the right way — using the best ingredients, and a lot of hard work.
To be in Eastern Market puts us at the center of the region’s hub for fresh food and produce. It also has historically served as the epicenter of alcohol production in Detroit. There is such a great history to build on [there,] and access to all the freshest ingredients.
Our Whiskey Factory is in the old Stroh’s Ice Cream Factory and former Goebel Brewery. It’s truly a special place to call home.

The Review: What are all your products? Was there a deliberate order to which products you started making when, before the others, etc.?

Steve: We make bourbon, rye, gin and vodka. There are only two rules at DCD. We make what we want to drink, and we make spirits using the best ingredients Michigan has to offer.
In addition to our flagship spirits, we make a lot of experimental small-batch spirits. We make unique single barrel bourbons with different mash bills, or collaborate with bartenders to make rum or gin. It’s all about the craft for us. We love the process of making spirits.

The Review: What made you decide on a “Paczki Day Vodka”? What is it, exactly, and how does it differ from your other vodka brand(s)? Do you have a connection to, or fondness for, Hamtramck?

Steve: I made Pączki Day Vodka because I wanted to capture the spirit of the Pączki Day party in Hamtramck in a bottle.
We distill glazed raspberry paczki from New Palace Bakery in 100% pure potato vodka from Poland. I thought it’d be a fun way to honor my Polish heritage, and create something to celebrate the day with my friends and family.
Every year we go to Hamtramck to celebrate. It’s a special day in a special place—all the camaraderie, music, food and, of course, the vodka. There’s nothing like it.
I tried to capture that when I made Pączki Day Vodka.

The Review: Are you going to continue to make PDV after Fat Tuesday, or do you see this a limited time, small batch specialty product? What is the price point for the spirit?

Steve: We only make Pączki Day Vodka once a year, for Fat Tuesday. PDV sells for $30.

The Review: What are the ways that people who want to try PDV can find it? What sort of distribution network do you have in place right now for your products?
Can you find them in other counties, for example up north, in other states, or even other countries? And if not yet – any future plans to expand your reach?

Michael: This year, people can buy PDV online at detroitcitydistillery.com, and then pick it up at our tasting room at 2462 Riopelle in Eastern Market. It goes on sale on February 1 at 9 AM. Pick up starts February 3 – 14.
We’d usually have a huge release party, but it’s different this year with COVID, unfortunately.
We’re also putting a lot more in distribution this year. You’ll be able to buy it at Kroger, as well as select liquor stores throughout Michigan and Chicago. We’ve gotten hundreds of requests to ship it out of state. We even got a couple of requests from Poland last year. That is definitely something we’ll aspire to figure out in the future.

The Review: Do you have any other planned specialty products coming in the near future, or anything else you’ll be adding to your permanent product line forthcoming?

(Ed. Note: Just a couple of days after we received and formatted this interview, an announcement came down the pike of a few extra thrills: first, a couple of extremely limited Paczki Day Vodka flavors: “Powidl” (Plum) and “Wild Rose,” at $30 per bottle (limit one bottle each, since the batches were capped at just 200 bottles each; both again distilled from flavors provided by New Palace Bakery here in town), as well as a pair of bottled cocktails such as Steve had just alluded to here, “The Polish Daisy,” featuring PDV, Cocchi – an Italian aperitif – vanilla, and lemon; and “The Polish Bloody Mary,” featuring Srodek’s own brand of horse radish distilled in Polish potato vodka. Again, check the website.)

The Review: Feel free to add anything else that you want to that I haven’t touched on, if you choose. And thank you so much for your time!

Steve: Nothing further to add! Thank you for this opportunity!

And thank you to Liz, Steve and Michael for filling us in on this intriguing sounding product. I can almost assure you we’ll be sampling this sooner than later.

(Update: The vodkas sold out in 22 minutes. You may still, however, be able to find some in stores. The list of stores that carry the vodka is over four pages long, but includes only Steve’s Party Store on Caniff near I-75 as its lone Hamtramck location. Most area Krogers are listed, along with many specialty grocers or upscale liquor or wine shops. Good luck!)