Number of new voters requires adjustments by the city 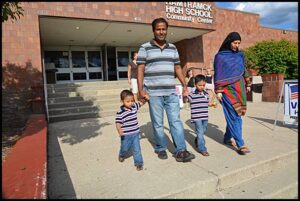 Over 600 voters in precinct 4 will now be transferred to precinct 5. That’s because precinct 4 exceeded its legal limit of 2,999 voters – the maximum number of voters allowed in any one precinct. File photo

By Charles Sercombe
You can probably credit Hamtramck’s recent crop of new candidates for getting more people to register to vote.
The growing number of registered voters during the past few years has resulted in a need to move 600 voters currently in precinct 4 over to precinct 5 – which means they now have a new building to go vote at: the Senior Plaza on Holbrook.
City Clerk Rana Faraj recently announced the change at a council meeting, and the council has OK’d that move.
The city really didn’t have a choice. According to state election law, no single precinct can exceed 2,999 registered voters.
Faraj said that it is likely the city will soon have to create a new precinct to handle the growing overflow.
Those voters affected live in the area bounded by Jos. Campau, Gallagher, Holbrook and Trowbridge.
Faraj said notices will be going out to affected voters. The next election coming up is the August Primary.
Hamtramck has over 13,000 registered voters – up from about 11,000 in recent years. At best, though, there has been a 60-percent turnout. The last (local) election only saw a 38-percent turnout.
In recent years, Hamtramck candidates have been aggressively pressing voters to register. Not only that, but more and more voters are opting to vote by mail, or (in other words) via absentee ballot.
The up-tick in voters mirrors a huge increase in the city’s population, according to the 2020 US Census.
The city’s population shot up from, officially, about 22,000 to over 29,000 since 2010 – the highest percentage ratio of any community in the state. And some suspect it may even be higher than that.
Voters from the Yemeni-American community have been especially energized in recent years. The city council and mayor are now all of the Muslim faith.
The Yemeni-American community now appears to be the dominant political force in the city, which was previously, for many years, an enclave of Polish-Americans.
The Polish population has steadily headed for the suburbs north of Hamtramck in the past 20-plus years.
Posted May 20, 2022