Oh what a day for paczki lovers 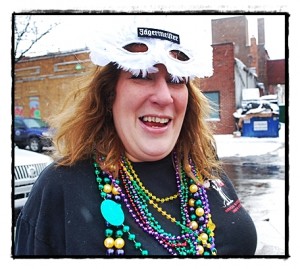 By Charles Sercombe
Imagine if Hamtramck was packed all day long, with long lines out the bakeries and the bars full of happy people listening to bands and the traffic down Jos. Campau was impossible to get through.
And imagine that this went on from early in the morning to late at night.
Well, that pretty much sums up Tuesday’s Paczki Day – Hamtramck’s very own version of Fat Tuesday and Mardi Gras.
For the second year in a row, Paczki Day in Hamtramck was a smashing success. The local bakeries kept churning out the once-a-year pastry treats all day Monday and Tuesday while bars like the New Dodge Lounge were packed to the rafters with revelers dancing their butts off to Hamtramck’s favorite party band, The Polish Muslims.
If you have ever wondered how many ways there are to make a pun out of the word paczki (pronounced POONCH-key), look no further than the Polish Muslims.
At other bars in town, you could catch the polka sounds from the Kielbasa Kings and Misty Blue to perhaps the weirdest, Polka Floyd, which as the name suggests is a band that plays Pink Floyd tunes in a polka style.
You don’t even need to drink a few beers to get into it.
At PLAV Post 10, you could get a combination plate of Polish food that could easily feed two. And that amount of food helped many get through the day as they danced and yakked and laughed from one bar to another.
Paczki Day has always been a big thing in Hamtramck since the 1980s when under the direction of then Mayor Robert Kozaren, a team of civic leaders hatched a marketing plan to make Paczki Day something visitors would want to check out.
The plan was an immediate hit and it wasn’t long before Hamtramck became a media darling. But in the last several years the thrill wore out and it became a rather humdrum kind of day. And then New Dodge owner Cathie Gordon got the Polish Muslims to play early in the morning at her bar with a local FM radio station covering it live and Paczki Day was reinvented. And yes, there were plenty of other folks who deserve a round of applause for making Paczki Day special again.
Mayor Karen Majewski said she would like to see the city expand the event and link up more bars and halls and further promote the day.
“It just keeps getting better and better,” she said.