On Jos. Campau, history can be found almost everywhere 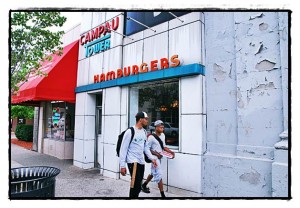 Most people can figure out that Hamtramck has a lot of history behind it.

That fact is likely about to get a whole lot more official.

Rebecca Binno Savage, with Hamtramck’s DDA (Downtown Development Authority), is also the historic preservation lead, or point person, on an on-going project to designate 80 buildings along Jos. Campau as Historic Places on the National Register.

The project is well underway and, according to Binno Savage, is already at a point where its success is likely.

“Usually, once a project gets this far,” it’s a fairly foregone conclusion that it will be approved, Binno Savage says.

She seems well-acquainted with the process, which began, as it must, with a call to Lansing.

“Initially, you go to the state’s national registry coordinator,” she explains. That person comes to town, and looks over each of the various buildings in question.

Then, Binno Savage had to fill out the National Park Service’s federal form NPS 10-900, also called the National Register of Historic Places Registration form. In this particular case, because of the high volume of properties up for the designation here on Jos. Campau, that form ran 62 pages long once completed, each page dense with type. The bulk of it, pages 5 through 47, is taken up by an inventory of all of the individual properties, including a paragraph describing each building, and then another paragraph each expounding on each building’s history, to the extent that history is known.

The properties span 21 blocks along Jos. Campau, from down on Lehman Street (one street south of Holbrook) north to Pulaski (four streets north of Caniff). There are a total of 130 properties within that stretch, of which 80 are “contributing to” the district, according to a press release, and therefore eligible for the designation.

About two weeks ago, on May 18, Binno Savage says, the application was presented in Lansing to the State Historic Review Board, and they approved it. She does still have to complete a detailed map of the each property including, for example, lot measurements. She expects to have that fully completed and off to Lansing by next week, she says.

When the state has everything it needs from her, it will then forward the whole package to the National Park Service.

Binno Savage says that, while she was the one ultimately charged with putting together this massive document, the project was in fact initiated by Jason Friedmann, Hamtramck’s Director of Community & Economic Development, and used the writing and research of city historian Greg Kowalski as the basis for much of the historical background for the inventory.

Dr. Ted Radzilowski was also helpful in that area, she adds.

Most of the property owners involved will be glad to see this happen, Binno Savage indicated in the press release.
Asked about specific buildings she thinks are real city treasures, she cites the one owned by Mark Hausner on the northwest corner of Jos. Campau and Belmont – the tallest building on the strip – as well as Campau Towers, the bank buildings of PNC, Huntington and Talmer, and even the Shoppers World building which, while it may not seem that architecturally significant as it stands, actually could benefit a lot from the potential tax breaks afforded by the historical designation.

The upshot of all this is, that any building so designated will net a 20 percent property tax break for any owner who wishes to use said savings toward rehabilitating the structure. Additionally, the designation provides some federal protection against its own other departments’ projects. For example a federal highway loop being drawn through the middle of town would be restricted from impacting the designated structures.

Owners can still choose to do anything to the buildings that they want to with their own funds, however, including totally razing them, making radical changes to them, or anything else allowed by the city.

And while this would be Hamtramck’s largest such district, it wouldn’t be the first.

For her part, once this project is successfully up and running, she’ll then be moving on to a couple of other ones, this time in Detroit.

But the benefits of all the work that she and others have done should last this city for quite some time. Here’s a deal where everyone, it would seem, wins.

3 Responses to On Jos. Campau, history can be found almost everywhere