On Sunday, St. Florian to be invaded by a ‘Mass Mob’ 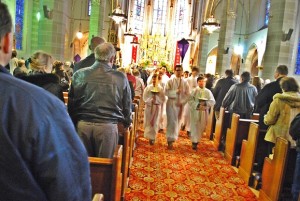 There will not only be a Mass this Sunday at St. Florian, there will be a “mob” on hand as well.

By Mike Murphy
Special to The Review
For some, the thought of a mob descending on a Catholic church might evoke images of destruction and anti-clerical fervor, but St. Florian Catholic Church this Sunday is set to welcome with open arms a Mass Mob of an entirely different kind.
“It’s going to be a real community day,”  Florian alumni Anne Marie Ochab Timpf said. “It’s kind of nice to get back in touch with people. It’s like coming back home.”
Timpf has been working as a liaison with organizations Catholic Mass Mob of Detroit and Detroit Mass Mob, two groups that make up the Mass Mob Movement in the Detroit area.
Through organizing Mass Mob events, the organizations aim to financially assist sparsely attended churches and expose local pilgrims to Catholic masses at some of the Detroit area’s most architecturally stunning churches.
For Timpf, whose organizing efforts have been aided by eight siblings, all who graduated from St. Florian High School after 12 years of education in the Parish school, the St. Florian Mass Mob event will be a family reunion and a homecoming.
Sunday’s events include a noon Mass celebrated by Detroit Archdiocese Bishop Donald Hanchon, followed by tours of the church and an afternoon picnic.  The “Say Goodbye to Summer Picnic” following Mass will include traditional Polish food, a cash bar, Polish dance ensembles and will stay open until 6 p.m.
Timpf’s large family grew up in a house on Gallagher. All of the Ochab children were baptized and confirmed at St. Florian and some were married in the Church.  Timpf said her mother, Mary Ochab, still lives in the Gallagher house and remains a St. Florian parishioner.
Timpf, who left the parish after moving to Ohio before returning to the Detroit area, marrying, and settling in Macomb Township, said she and her brothers and sisters have been scouring their old yearbooks and inviting fellow Florian alumni to the all-day  event.
But not everyone joining the mob on Sunday will be familiar with Hamtramck, and organizers of the event are hoping to expose the city and some of its attractions — such as St. Florian — to people who otherwise might avoid Hamtramck.
“It’s just a good thing for Hamtramck,” Annamarie Barnes of Catholic Mass Mob of Detroit said. “It’s a beautiful, viable city and some people just don’t realize it. The Mass Mobs change a lot of people’s perceptions about the city they are held in.”
Inspired by a similar movement in Buffalo, New York, in which suburbanites and other non-parishioners organize visits to some of the city’s beautiful urban churches, the Mass Mob Movement in Detroit has become something of a phenomenon for its appeal to churchgoers looking for something new and its power to raise funds.
“In the City of Detroit, the average parish in the areas where the Mass Mobs have occurred has around 200 families, or just under 500 individuals, registered,” Archdiocese of Detroit Director of Public Relations Joe Kohn said. “It’s not uncommon to have a large Catholic church attended by only a 100-200 people at a given service.”
Barnes estimates some mass attendances are as low as 25 people. She said such small congregations are common at her parish, St. Hyacinth’s, on Detroit’s eastside. A Mass Mob event can bring out thousands to these churches and that translates into much needed funds for the parishes, she said.
A Mass Mob outing to St. Albertus on Canfield in Detroit brought out 2,000 people to the church and donations amounting to about $24,000. Not far from St. Albertus, Sweetest Heart of Mary found itself about $24,000 richer after about 1,900 attended a mass, Barnes said.
And while one-day visits to churches ailing for parishioners and funds may represent a temporary shot in the arm, the mobsters are hoping to have a lasting effect.
“People say that’s just a quick fix, but we hope to reignite people to come back to the churches of their ancestors,” Barnes said. “It’s good to see the families coming. They are sparked with their Catholic faith again.”
Barnes said the idea is not to restrict visits to Detroit’s most elegant Catholic churches but to visit churches that are in financial straits.
The Movement is actually the combined effort of a number of organizers, including Barnes’ Catholic Mass Mob of Detroit, initially created by Jeffrey Stawasz and Thom Mann, and Anthony Battaglia’s Detroit Mass Mob organization.
“It’s a group of four individuals with a common interest,” Barnes said. “I can’t do it without them, and they can’t do it without me. We’re kind of a force to be reckoned with.”
The likeminded organizations are active on Facebook, and social media networking plays a big role in getting people into the pews.
Requests for Mass Mob events are pouring in, Barnes said, and the organizers are excited about the response to the Movement, which they hope might warrant a visit to Detroit from recently elected Pope Francis.
Barnes said the groups are also considering branching out denominationally and paying visits to non-Catholic churches in Detroit. The Mass Mob events can be eye-openers for some of the younger churchgoers, she said.
“We went to St. Ann’s in Detroit, and it is just gorgeous. Young people don’t see it,” Barnes said. “You just don’t have this workmanship out in the suburbs.”
Barnes said the organized pilgrimages would not be nearly as successful as they are without the work of liaisons, the parish members who in some cases put in a request to the Mass Mob Movement or are asked by the Mass Mob Movement to make arrangements.
“We chose not to bombard the church offices and to ask one of the parishioners instead. They do all the backbone work. We ask them to tell us what they want, and then we promote it,” Barnes said. “The family ties are important. They keep us informed. They are our go-betweens.”

One Response to On Sunday, St. Florian to be invaded by a ‘Mass Mob’