On the road to more street repairs near the GM plant 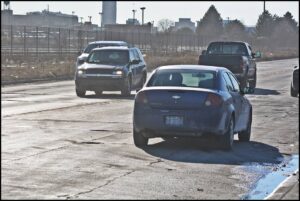 Hamtramck Drive is one of several streets near the GM Poletown plant that will be resurfaced this spring, thanks to a state grant and the City of Detroit financial commitment.

By Charles Sercombe
Road repairs in Hamtramck just got a major shot in the arm.
The roads north and south of GM’s recently renamed Factory Zero will be repaved, thanks to a Michigan Department of Transportation grant for $6 million, and the City of Detroit kicking in $5.7 million.
The total for the project comes to over $11 million.
GM recently renamed the plant Factory Zero, to both reflect the new technology being installed there, and the new line of electric-fueled cars to be produced. GM says 2,200 workers will be stationed at the plant.
GM plans, in the next several years, to manufacture 40 percent of its cars to be battery-powered.
The plant was formerly known as the Detroit-Hamtramck Assembly plant and, locally, it’s still known as the Poletown Plant.
The roads to be repaved are mostly in Detroit, but also include Hamtramck Drive, which is a moonscape of potholes. A Wayne County jail is also on this street.
The project will repave the following:
Mt. Elliott Street, from Conant to Harper; Conant, from Mt. Elliott north to the city limit just south of Miller; Hamtramck Drive, from E. Grand Boulevard north to the Detroit city limit; and E. Grand Boulevard, from Trombly to Hamtramck Drive.
GM is investing over $2 billion to retool the plant.
Road repaving is expected to begin in April.
GM has been concerned that the poor condition of the roads surrounding its plant would hamper parts deliveries, or even damage vehicles delivering parts.
All of the roads have been heavily trafficked by trucks for years.
Hamtramck, which owns a portion of Hamtramck Dr., is not only going to get a free road repair out of the deal, but also a major shot to its tax base.
Once the plant is back in operation, the city will then continue to receive tax revenues. The city had been collecting about $800,000 a year when the old plant was in operation until a couple of years ago.
With more employees at the plant, and more shifts working, the city expects to earn even more in tax revenue.
No tax revenues have been collected from the GM plant since it shut down over a year ago for major renovations.
Unfortunately, that gain will be zeroed out when Wayne County closes its jail. While the county has not yet directly said it will do that, local officials expect the jail to close when the new county jail is completed downtown, in the next year or so.
In a press release issued by the state, Gov. Gretchen Whitmer said:
“This is good news for our families, our businesses, and our economy as a whole. Every Michigander deserves to drive on our roads safely, without blowing a tire or cracking a windshield, and this partnership with GM will help us reach that goal while creating good jobs for Michigan workers.
“I am pleased that we were able to work with this long-standing company and the City of Detroit on the road improvements necessary to support GM’s Factory ZERO, and I will continue working with everyone who wants to create Michigan jobs and improve our state’s infrastructure. Let’s get to work.”
Posted Feb. 5, 2021