Once a law enforcer, this candidate now wants to become a lawmaker 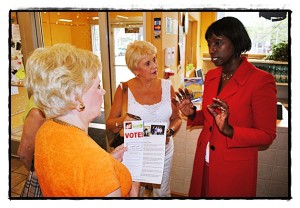 What do you get when you cross a retired Detroit police officer and former elementary school teacher with a current State Representative? State Senate candidate Bettie C. Scott.

This week, Rep. Scott was in town to meet and greet her potential constituents and spread the word of her candidacy. And though she served two successful terms as State Representative, this time around she’s got her sights set a little higher – State Senator.

Rep. Scott – who is not related to current State Senator Martha Scott – has been socially and politically active for much of her life. In addition to serving as a precinct delegate and helping to create Detroit’s Adopt-A-Cop program for at-risk youth, she also founded the Calumet Townhouses Community Board and served as the president of the 3 Mile Block Club.

The crucial issues of Hamtramck’s past and present are something that Rep. Scott is definitely familiar with. During the call to prayer debate a few years back, she assisted the city’s Muslim residents with the issue by holding crime prevention seminars and diversity training. And she says that Hamtramck’s current financial dispute with Detroit is something that concerns her.

Before throwing her hat in the political ring, Rep. Scott served as a Detroit police officer for 17 years, ultimately becoming eligible for the rank of lieutenant before retiring as a sergeant. She also graduated from Wayne State University with a combined degree in education and sociology and worked as a teacher for six years – first as a substitute and then full time.

For her campaign for State Senator, Rep. Scott says she has three main issues. Her first objective is to strengthen the public’s trust in the police and to foster a better relationship between the two groups. Second, she would like to work with DTE to make it more consumer friendly. Finally, she wants to see the Driver’s Responsibility Act get repealed, as she believes the law is unfair and is counterproductive.

“Being a police officer, I believe in getting you and arresting you if you commit a crime,” she says, “but I don’t think you should have to do double time for a law we put on the books.”

Beyond those three objectives, however, Rep. Scott says her ultimate goal is to improve the lives of her constituents. She says that unlike the other candidates in the race, she has never had a position or job handed to her, and that any job she has gotten was because she was qualified, educated, and worked for it. Ultimately, she says she’ll do whatever it takes to make things better.

“I will go across the aisle for the greater good of the people,” she said.