Once again, councilmember comes under fire 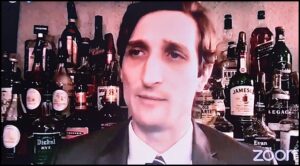 By Charles Sercombe
The hits just keep coming against City Councilmember Ian Perrotta.
At Tuesday’s council meeting, a majority of councilmembers took a rare – if ever – action, and voted to remove Perrotta as Mayor Pro Tem.
They replaced him with Councilmember Fadel Al-Marsoumi.
The position of Mayor Pro Tem was created to fill in for the mayor when they can’t perform their duties – such as running a council meeting.
The matter was the only issue not requiring a consent vote on the agenda, and as you can imagine, it became a heated discussion.
Perrotta has been no stranger to controversy. He has twice been censured by a majority of his fellow councilmembers for past behaviors. Even censures are an action rarely ever taken against a councilmember.
(Perrotta was censured for creating a hostile work place, and berating a city employee, in two separate incidents.)
It doesn’t stop there.
Perrotta is now the target of a recall effort that is being spearheaded by fellow Councilmember Mohammed Hassan.
The two have previously tangled during council meetings, with some interactions resulting in shouting matches, and to the point of Perrotta stomping out of one meeting.
Besides the recall, Hassan was behind the resolution to remove Perrotta as Mayor Pro Tem. Councilmember Al-Marsoumi co-sponsored the resolution.
The reasons given for stripping Perrotta of his title as Mayor Pro Tem were:
o His past two censures
o A loss of confidence in his ability to represent the council
o A loss of council support
o And “the credibility of this council will erode as long as Councilman Perrotta holds the position of Mayor Pro Tem”
Perrotta, in a 20-minute speech he gave later in the meeting, lashed out against his colleagues. (You can read his full statement on his Facebook page.)
Essentially, he called the matter a “giant con.”
“Another council meeting, another item on the agenda trying to do something negative to me rather than something positive for the city. The whole thing is a farce and a petty misuse and abuse of the office of city council,” Perrotta said.
He then went on to highlight all of his achievements in the community, and how his achievements outweigh what others on council have done, and how he became an attorney.
Perrotta also referred to Hassan and Al-Marsoumi as “clowns.”
During most of this statement, he played a recording of Scott Joplin’s “The Entertainer” because he said it was an appropriate “theme” to a con.
(The council meetings have been held via Zoom, with each councilmember at their own location. Perrotta has been Zooming from what appears to be his bar, Trixie’s, with a backdrop behind him of rows of shelving stocked with liquor bottles.)
His supporter on council, Andrea Karpinski, said the actions being taken against Perrotta are “infuriating.”
(Both Perrotta and Karpinski were the only ones to vote against the resolution to remove Perrotta as Mayor Pro Tem. The mayor was not required to vote on the matter, unless there was a tie.)
Karpinski also said that it should be Councilmember Hassan being taken to task, since he was recently warned by the state Attorney General’s Office for alleged illegal campaign activity leading up to the Nov. 3 election.
Hassan has not been charged with a crime, and he told The Review he did not do anything improper during the election.
Also voicing their outrage were several community members.
Asm (Kamal) Rahman, who has run for mayor in Hamtramck in the past, said the council’s action is tantamount to “double jeopardy.”
He said that Perrotta has already been “punished” by the censures.
Rahman also said that some members of the council are making “decisions based on hatred” of Perrotta.
Bill Meyer had an, er, interesting take on the matter. He theorized that if Perrota was removed as Mayor Pro Tem, it could be “a trick up the mayor’s sleeve” to allow her to appoint him as assistant mayor.
Mayor Majewski did not respond to that comment, but right after Meyer spoke she let out a chuckle.
Before the vote was taken, both Perrotta and Karpinski first proposed having Councilmember Mohammed Alsomiri be appointed as Mayor Pro Tem, instead of Al-Marsoumi.
That motion failed, with even Alsomiri voting against it.
Councilmember Nayeem Choudhury was absent from the meeting.
(Editor’s note: Perrotta is a former copy editor for The Review. He is no longer associated with the paper.)
Posted Nov. 13, 2020