Once again, rumors fly about Kowalski Co. moving out 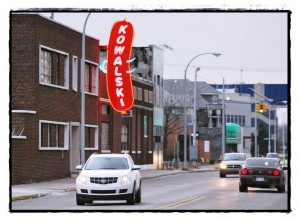 Once again, rumors have spread through town in the past few weeks that one of Hamtramck’s oldest businesses – if not the oldest – is pulling the plug on its famous neon sign and is relocating.

As it turns out, there is a kernel of truth that the Kowalski Sausage Co. has made overtures to relocate to a vacant building in Madison Heights, according to a recent C&J news report.

City officials also said they recently met with the head of the company, Mike Kowalski, to see what it would take to keep the business located in Hamtramck. Kowalski did not return a call for comment and has ignored past calls for comment as well.

City officials said they could not talk in detail about what was discussed with Kowalski, but did confirm that there is a good chance that tax and development incentives are on the table.

The Kowalski Co. recently celebrated its 90th anniversary. According to its website, over 200 employees work at the plant, and 75 different food products are sold.

In the past, city officials have said the company needs to expand its plant, and consolidate its three production buildings into one. Hamtramck has vacant land that could be developed with the use of special “Brownfield” tax incentives offered from the state.

Tax-wise, Hamtramck would suffer a minor loss in revenue if Kowalski indeed moves out of the city. According to city records, which are public, the company paid $24,600 in property taxes last year and $18,500 from income taxes.